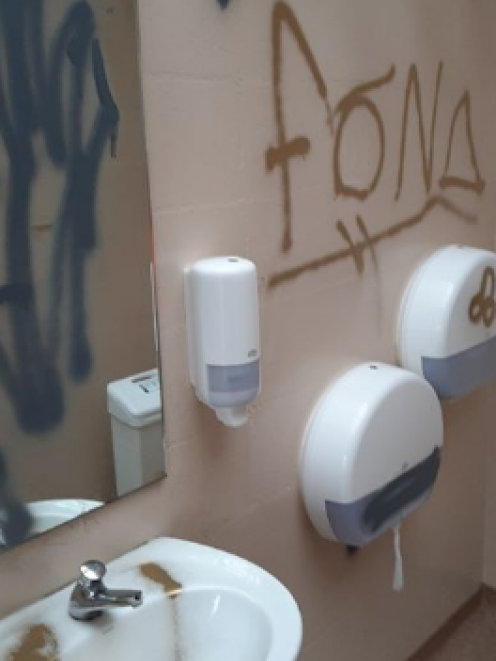 A toilet block was tagged. Photo: Waitaki District Council
Graffiti discovered in various places around the Oamaru Public Gardens this week has been labelled by police as "disgraceful".


On Thursday night, play equipment, along with one of the children's paddling pools, at the playground that borders Chelmer St was defaced with spray paint, as was one of the cubicles in the nearby toilet block.

More was found on the red Chinese bridge, a path near Craig Fountain, the North Otago Tennis Club building next to the playground, and also a tree.

Some of the graffiti included offensive language and indecent images.

It was believed the two acts of vandalism were linked.

In a separate incident, a small amount of graffiti was discovered at the gardens early this week.

However, it was believed the most recent graffiti attack was not related to the vandalism of the Oamaru stone entrance sign at the southern end of the town, which was carried out over the weekend, Const Alden said.

Tagging at the gardens was not reported often, but the recent spate of vandalism had police worried.

"It is a concern, especially in an area like the public gardens. Kids play there a lot and it is used quite a lot by the community. To see it happen there is disgraceful, really ... People should not have to see that."

"It's just straight out vandalism. With [Victorian] heritage week coming up, it's just extra work for my guys and it just means the town looks shabby."

He said he failed to understand why those responsible felt the need to deface public property.

"What they are doing, they think is great. There are putting their sign around. But it's damaging the property that belongs to the Oamaru people ... It's an ongoing cost to ratepayers."

The graffiti was removed by Downer staff yesterday.