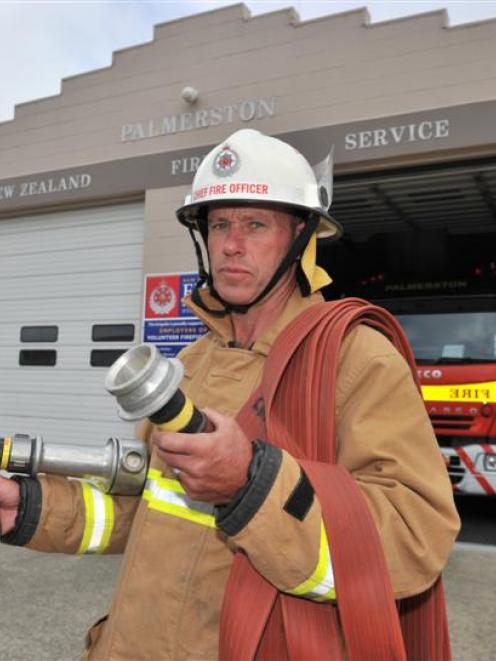 Palmerston Volunteer Fire Brigade chief fire officer Gary Johnston holds a dry fire hose. Photo by Linda Robertson.
Palmerston volunteer firefighters called to send a water tanker to a scrub fire at the weekend had one problem: they no longer have a tanker.

The tanker was taken out of service last month and might not be replaced before July 1, despite East Otago having one of the driest summers on record.

Fire communications in Christchurch, believing Palmerston still had a tanker, called the brigade to a vegetation fire in Hampden at 5am on Saturday, Mr Johnston said.

But the tanker had failed a certificate of fitness test and was taken off the road by the Otago Rural Fire Authority because it was not economical to repair, he said.

The Palmerston brigade has been told by the authority that no replacement would be available for at least six months.

The tanker, supplied by the authority and Waitaki District Council, was an essential back-up to fight fires in areas out of town with no water reticulation.

Palmerston's fire appliance could hold only 2000 litres of water, not enough to fight most rural fires, he said.

Several East Otago community members, including the Waihemo Community Board and Civil Defence, were concerned given the very dry summers.

The authority's principal rural fire officer, Stephanie Rotarangi, said no date had been set to replace the Palmerston tanker, agreeing it could be July 1 before a budgetary decision could be made.

She said the Palmerston brigade could be supported by tankers from Waikouaiti or Hampden.

Mr Johnston said relying on tankers from other areas would double the response time to rural fires.

Waihemo Community Board chairman Geoff Foote, of Flag Swamp, said yesterday he supported the need for a tanker at Palmerston.

Several rural scrub fires have occurred near Palmerston in recent years, including at Meadowbank near the town and along the Horse Range Rd.