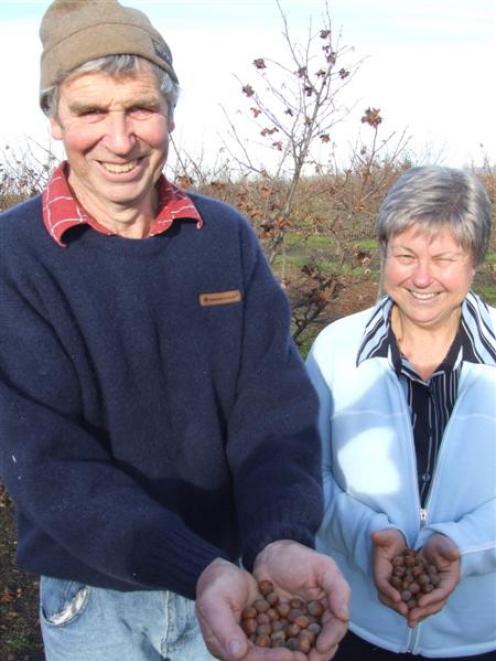 Mr and Mrs Newlands first planted about 1500 trees in 2000, after finding a source of water which was not enough to grow grass for conventional farming, but was too much "not to do anything with".

The couple decided to explore other options and, after attending a field day at Telford Rural Polytechnic, thought hazelnuts sounded interesting.

The couple were involved with the annual meeting of the Hazelnut Growers of New Zealand held in North Otago at the weekend.

About 50 people visited local growers and attended the annual meeting at Mr and Mrs Newlands' home.

It was a weekend of information-sharing, they said.

HGANZ began in the 1980s as an interest group within the Tree Crops Association of New Zealand and developed into an association in its own right in 2002.

Growing hazelnuts appealed to Mr and Mrs Newlands as it was a low-profile venture and something they could control.

They had made mistakes and were continually learning.

The couple harvested 1.2 tonnes of nuts this year and hoped to eventually get to six tonnes when in full production.

They hand-sorted and dried the nuts before packing them into bags and sending them to Christchurch where they were processed and marketed.