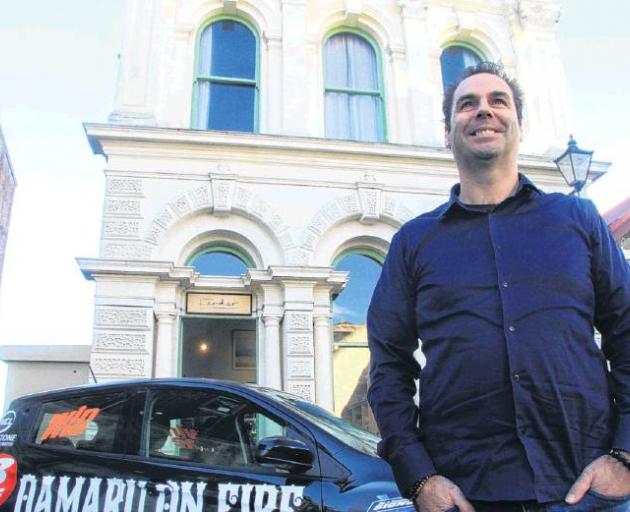 Despite being pilloried by some on social media, Oamaru On Fire organiser Anton Roswell is adamant his Harbour St event is different from Oamaru Fire and Steam, which will be held a week earlier. PHOTO: HAMISH MACLEAN
Nothing to see here, no drama, "vastly different".

Oamaru On Fire organiser Anton Roswell has dismissed claims by some in Oamaru the event he is staging on June 8 is creating confusion in the North Otago town as one of its biggest weekends nears.

The 10th anniversary of the Steampunk NZ Festival is set to begin on May 31 with the Fire and Steam festival, in Harbour St.

However, the unaffiliated Oamaru On Fire eight days later, also in Harbour St, has been called too similar and too "close" to the street party.

Among those expressing concern about the timing of Oamaru On Fire is Waitaki Mayor Gary Kircher, who said the similarity of the events had created confusion with locals and possibly with sponsors and visitors.

"Over the past five months or so, I've been involved in discussions with both groups and to be honest, I'm frustrated with the persistence by [Mr Roswell] to run his event as close to the existing one," Mr Kircher said.

"There are too many similarities, and the very similar names are already causing confusion as people think they are the same event.

"Both will rely heavily on locals to attend and pay the entrance fee, and while some people will go to both, there are many who will choose only one.

"We run the risk of not just one, but both events failing."

Launched in 2012, Oamaru On Fire changed to become the Fire and Steam festival in 2015, but Mr Roswell retained the name of the original event.

Last year, the future of Fire and Steam was put in question after Tourism Waitaki general manager Margaret Munro announced the Waitaki District Council-controlled organisation would not continue to back the event.

His event would raise money for Ronald McDonald House and the Oamaru Volunteer Fire Brigade.

The council also indicated that it would not support an application for funding for Oamaru On Fire, "due to its similarity" to the now community-led Fire and Steam, which it granted $10,000.

Tourism Waitaki general manager Margaret Munro confirmed a staff member had offered advice to the Oamaru On Fire organiser, but that advice was the limit of the support Tourism Waitaki could offer to any event.

Fire and Steam festival director Helen Jansen said she was "not at all" concerned the later event would detract from the Steampunk NZ Festival opening event next week.

Last year, 5000 people attended Fire and Steam and the street party had been "bigger, bolder, and better" than any iteration of the previous event.

"Everybody loved it, and we've got some additional things happening this year."