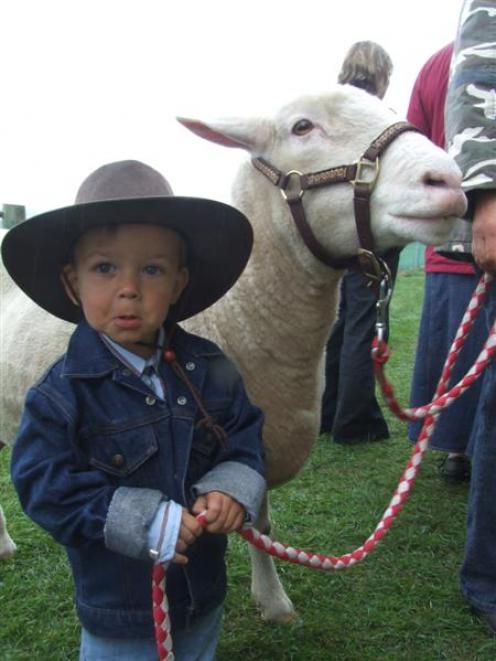 Mrs Ottley (31), a teacher at Waimate High School, has been riding side-saddle for about 10 years.

Her biggest thrill was winning champion side-saddle at the Royal Show in Christchurch last year, against strong competition.

Mrs Ottley's horse was a 6-year-old Clydesdale cross gelding and suitedto the discipline.

Side-saddle combinations were judged on manners, balance and harmony, she said.

Her costume, known as a habit, and top hat were sourced from England and her saddle came from Australia.

She had been grateful for the support of members of the New Zealand Side Saddle Association, who had been very helpful.

Mrs Ottley is looking forward to competing in the side-saddle class at the Horse of the Year show in Hastings later this month.

Levi Heffernan (2) was one of the smallest competitors at the show, but his pet sheep, Big Boy, weighing in at a whopping 145kg, was aptly named.

Flour bombs were lobbed at the opposition by members of the celebrity team during the Otago Daily Times Charity Challenge.

The celebrities, along with two Top Town teams, had to catch golf balls in gumboots, transport eels from a trough to buckets, eat cold pies, baked beans, dry Weet-Bix and drink a can of beer, dress up sheep and then pull a team member on a sulky through the finish line.

The competition was won by one of the Top Town teams - captained by Rhys Martin - and the North Otago SPCA benefited by $500.