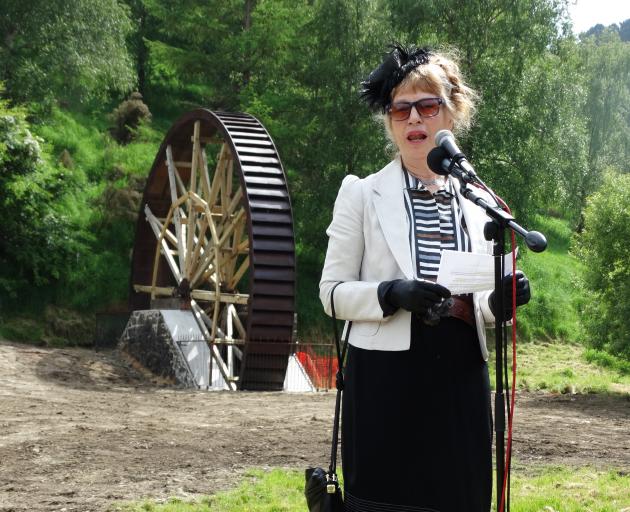 About 60 invited guests attended the handover ceremony at the wheel’s Old Mill Rd site, many dressed in Victorian costumes for this week’s Victorian heritage celebrations.

Work to restore the 10m diameter wheel, which powered the Phoenix Flour Mill, started in June 2017 about six years after it was dismantled and stored.

Originally installed 140 years ago, the wheel was given a new lease of life by the Phoenix Mill Restoration Trust, established about seven years ago by former North Otago resident Richard Pringle.

It was  lifted back into place on September 24 after a stone pit, using some of the original stonework, was constructed to house it.

Speaking at the ceremony, trust chairwoman Carol Berry said the wheel had played an important part in Oamaru’s industrial history.

"One hundred and forty years ago, this wheel was built to power the grinding of the wheat into flower, one of this district’s first industries.

"It carried the name Phoenix because just as the mythical phoenix bird of Greek mythology had risen from the ashes to live again, so this wheel rose on the same site as an earlier venture, a flax mill which had been destroyed by a flood."

Waitaki Mayor Gary Kircher said the ceremony was a "notable day in our history".

"It’s still a work in progress, but [the site is] turning back [into what] it has been used for in the past ... it’s going to be a community space again."

The area around the wheel will be landscaped and a covered area that explained the history of the mill and wheel, and also the restoration project, has been installed.

Listed as category 2 with Heritage New Zealand, the wheel was installed at the site of the Phoenix Flour Mill in 1878 and used to power the mill, before the mill building was removed in about 1907.