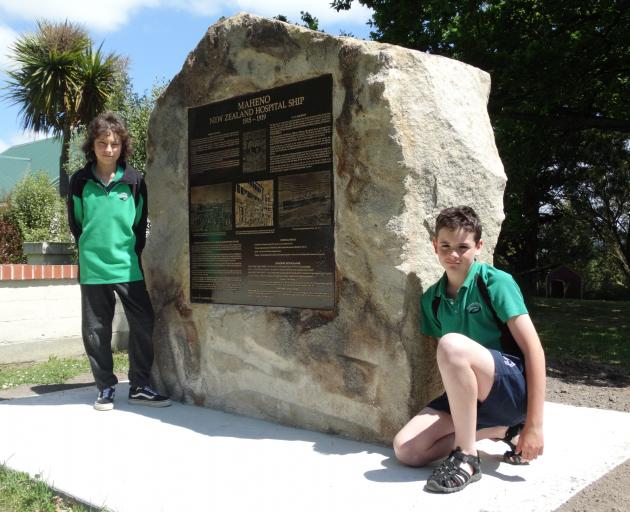 Maheno School pupils Jack Jones (left) and Ben Hamilton (both 12) at the Maheno cenotaph where a plaque dedicated to the hospital ship HMHS Maheno will be officially unveiled on Sunday. PHOTO: DANIEL BIRCHFIELD
Armistice Day will take on extra special meaning in Maheno on Sunday, where the township's links to a hospital ship named after it will be further strengthened.

On Sunday, people from around New Zealand and Australia will gather at the Maheno cenotaph to mark 100 years since the end of World War 1, which will feature the unveiling of a plaque dedicated to the HMHS Maheno, one of two passenger liners that were converted by the New Zealand government into hospital ships during the war.

The plaque is a replica of one at Fraser Island, off the coast of Queensland, where the ship's rusted hull remains after it was washed ashore in 1935 during a cyclone when it was being towed to a shipbreaker.

Maheno School principal Ryan Fraser said the idea of a replica plaque being installed at the cenotaph came about during the school's 2017 trip to Fraser Island to mark Anzac Day, which followed a previous trip in 2015.

"We unveiled the commemorative plaque for the Maheno ship over there and Russell Postle (Brisbane Rotary Club) and the New Zealand High Commissioner at the time, Chris Seed, had a discussion about whether we create a replica to place at the school at Maheno.

"They involved me in the discussion and I said to them it's an amazing idea, but I think it's actually bigger than the school, so I didn't think the school was an appropriate place. I thought it needed to go to the cenotaph and be a community thing."

The installation was confirmed about a year later and a plan put in motion.

"It was actually quite cool to see the ship and the plaque in person, not through videos or pictures. It's cool to carry forward the tradition here that we have been working on."

The rock on which to mount the plaque was sourced from the same North Otago quarry the stone for the Fraser Island memorial was, and the plaque itself contains the same images and information about the ship's history and wartime role.

Those invited to attend the service include Queensland-based MP Ted Sorensen, Sarah Johnson, of the Royal Australian Air Force, whose grandfather was the ship's First Officer,and Squadron Leader Carl Smith of the Royal New Zealand Air Force, an ex-pupil of Maheno School.

Maheno served off Anzac Cove, Gallipoli in 1915. Over three months, it carried casualties from Gallipoli to Moudros (Greece), Malta and Alexandria (Egypt).

It then sailed to the UK, arriving at Southampton in early July 1916.

Until October, it operated in the English Channel, taking large numbers of wounded troops from France to England.

Maheno returned to New Zealand in December and made six more voyages between New Zealand and the UK, bringing back patients, before it was returned to its owner, the Union Steamship Company of New Zealand, at the end of the war.