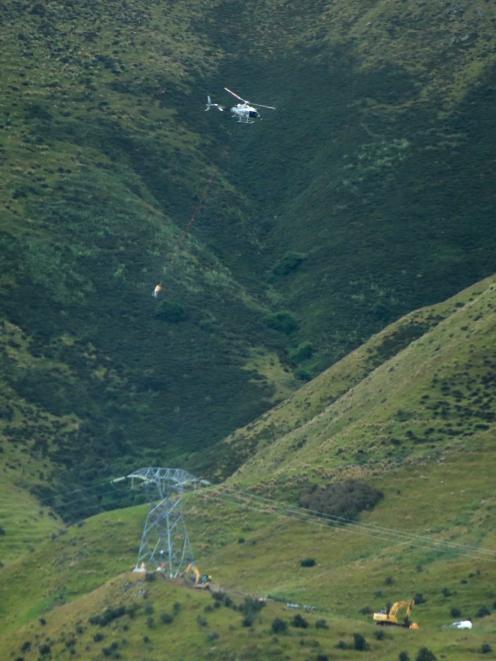 Project director Roy Noble said a team of about 45 people arrived in Oamaru over the weekend, and were using the Tokarahi Golf Club as their work base, while another 45 were staying in Ranfurly.

On Tuesday, both crews started working along Danseys Pass Rd — one from the north entry point at Livingstone, and the other from the south entry point in Naseby — to continue the upgrade of the national grid between Roxburgh and Livingstone, on the Roxburgh to Islington 220kV line.

Wiring crews are replacing the single electrical wire with two wires, known as duplexing, to increase the northward transmission capacity for New Zealand from about 600MW at present, to about 1000MW.

The work is a significant part of Transpower’s support to shift New Zealand to electrification and a low carbon economy by 2030. It will improve electricity supply to Southland during dry periods, and allow for electricity generated at the Manapouri Power Station in Fiordland, used by Rio Tinto’s Tiwai Point aluminium smelter at present, to be fed into the national grid after the smelter closes.

The project started in Roxburgh more than a year ago, and about 96km of the line has been upgraded so far. Mr Noble was pleased to be moving on to the final section, from Naseby to Livingstone, which was about 48km long.

"Our overall goal is to complete it by the end of May and we’re looking [like] we will have completed in April, so that’s even more pleasing."

Increasing the capacity put pressure on existing infrastructure, so the first step was to strengthen the pylons and their foundations, Mr Noble said. Helicopters this week started flying concrete to the towers that could not be accessed by vehicle.

The specialist crews, working on a 10-day on, four-day off roster, have come from all over the country to work on the project. In Oamaru, Transpower has hired holiday houses for crew members to live in for the next three and a-half months.

While work was under way on the final section, members of the public would see heavy construction equipment, helicopters, crews and their vehicles, traffic management, and signage along Danseys Pass Rd.

Transpower was implementing traffic management in some of the narrower areas of the road, to ensure the health and safety of crews and the general public, and asked motorists to follow the instructions of work crews and to be prepared to stop on request.

Any delays were expected to be brief, but Transpower could not rule out longer delays of up to two hours, depending on the requirements of the heavy construction works each day.