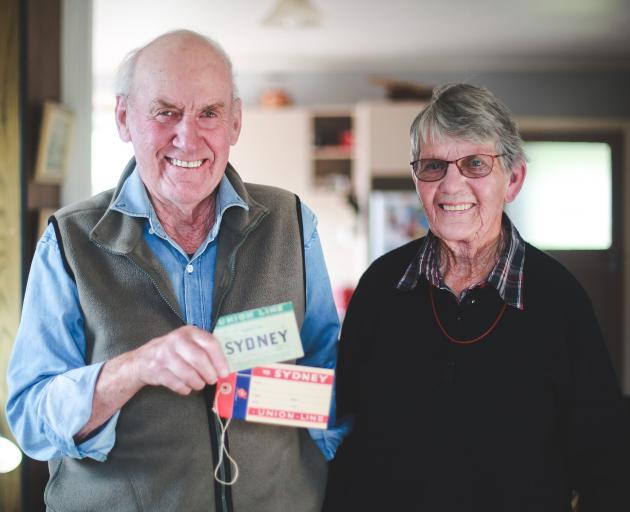 Weston couple John (85) and Ethel (88) Johnston, who celebrate their 60th wedding anniversary today, hold the ticket, dated February 1960, for the boat trip on which they met. PHOTO: REBECCA RYAN
Young couples of today may never understand the romantic charm of the love letter, but it was the spark that ignited a 60-year marriage for one Weston couple.

Ethel and John Johnston first met on a boat to Australia in February 1960, but parted ways when they reached Sydney. Mr Johnston was going to Darwin to shoot crocodiles, and Mrs Johnston (nee Greive) was heading off on a three-week holiday with her friends.

When a smitten Mr Johnston returned to New Zealand, he put his feelings to paper and sent a love letter to Southland Hospital, in Invercargill, where he knew Mrs Johnston worked as a theatre nurse.

They married the following year, on May 4, 1961, at the Central Baptist Church in Invercargill.

Mr Johnston was a sheep and beef farmer at Maitland, near Gore. Mrs Johnston said Maitland was a marvellous place to bring up their three children — Paul, David and Annette.

‘‘There was Sunday School, there was the Presbyterian church, there was Boys’ Brigade, Girls’ Brigade.’’

In the 1970s, the Johnston family moved to a farm at Clarence Bridge, a small settlement about 25km north of Kaikoura.

At the time, there was only a primary school in the area. After that, the options were sending their children to boarding school or driving them to Blue Duck Valley, about halfway to Kaikoura, every day to meet a school bus to travel to Kaikoura High School.

Mr and Mrs Johnston took the latter option and later got their bus driver licences, and a bus run, and worked as school bus drivers for many years, as well as running the farm.

During their time at Clarence Bridge, they became involved in many different community activities and served on various committees. Mrs Johnston also joined the local croquet club in Kaikoura and has continued to play and coach ever since.

In the ’90s, they sold the farm and moved to Waianakarua, south of Herbert. They farmed there for about 20 years, before retiring to Weston about two years ago.

Mrs Johnston insisted they were just ‘‘ordinary, garden-variety’’ people. She attributed their long marriage to ‘‘a bit of give and take’’ and having different interests.

Mr Johnston is a passionate sports and outdoorsman. When he was living in Southland, he played cricket and representative rugby for Eastern Southland, and he remains a keen deerstalker and duck-shooter. Their wedding in May 1961 was two days before duck-shooting opening day, but Mr Johnston still managed to sneak off to his pond that year — he never missed opening day.