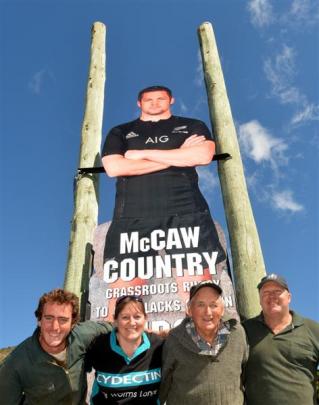 How good could All Black captain Richie McCaw be if he was nearly 5m tall?

In Kurow, where the 1.88m legend played the grassroots game, his stature has reached those heights, literally.

A cut-out of the Waitaki Valley town's favourite son, installed yesterday, stands about 4.8m high at the junction of State Highways 83 and 82.

Otiake local Bob Watherston (85) said the aluminum-composite sign that proclaimed the area McCaw Country was a ''loosely knit community affair''. He went door-to-door at Kurow businesses and everybody supported the project financially.

He was told if he needed more money for the project, he only had to ask.

In 2011, Carmen Slee made sure Kurow welcomed Rugby World Cup supporters to the town where the openside flanker was raised.

The hay bales that have decorated the spot for 21 consecutive years were painted with a black figure wearing No 7, and since then the Slees have been planning something for this year's Rugby World Cup.

That vision was not realised until late last month, however.

Over the past three years, Mrs Slee's son, Justin, and his wife, Janina, have produced Simpsons, South Park and Minions characters from hay bales on the spot for the summer.

But to celebrate what is expected to be McCaw's final international season, hay bales were deemed insufficient ''to do him justice'', Mr Slee said.

''Without insulting him, there's no way we could do the hay figures,'' Mr Slee said.

''I asked a local artist to do it and he wouldn't touch it.''

The Getty Images photograph that was chosen to represent McCaw was sourced just three weeks ago.

The McCaw Country sign also honours other All Blacks with links to the area: Denny Wise, Fred ''Did'' Vorrath, Charlie Saxton and Phil Gard.

It was assembled at the Slee farm at Otiake yesterday morning, then strapped to the back of a truck and taken to the intersection, before being pulled upright on to two power poles.

Three CCTV cameras watch over the sign, which is illuminated at night.

The group was ''hoping it might be'' a good luck charm when the All Blacks play France in Sunday's Rugby World Cup quarterfinal in Cardiff, Janina Slee said.