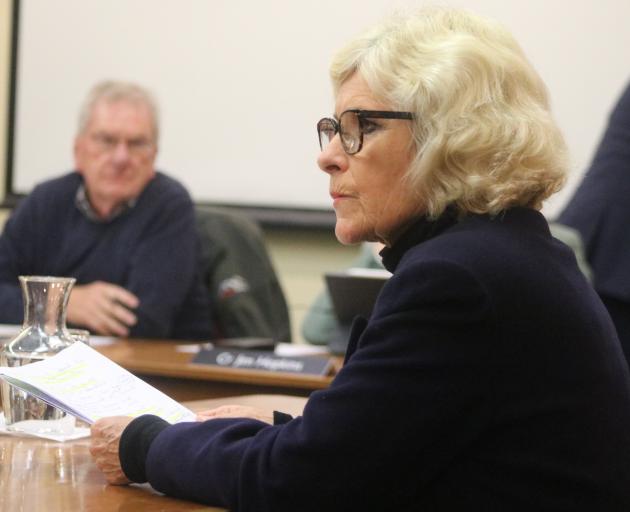 Jan Wheeler speaks at a Waitaki District Council hearing regarding a proposal to lease part of Awamoa Park to St John, as Cr Colin Wollstein (background) looks on. PHOTO: KAYLA HODGE
Fears public spaces could be lost was a hot topic during a resource consent hearing for Oamaru’s new ambulance headquarters.

Ten people provided verbal submissions at the Waitaki District Council hearing yesterday, and all but one opposed the proposal to allow St John to built its new ambulance base on part of Awamoa Park.

St John formally asked the council to lease the site off Wansbeck St in February, as its Coquet St premises were no longer fit for purpose, and the park was out of a tsunami zone.

At the hearing, Oamaru resident Mary Saxton said it was not the appropriate place for the base, and the community had a duty to protect its parks.

"It’s just a downright darn stupid place to build, and not very well thought through — where is the wisdom?" she said.

"We must strenuously strive to keep and maintain uninterrupted green space and trees."

"Do we want to set a precedent to give up recreational and amenity spaces to commercial enterprise?"

Rob Douglas agreed, and believed other businesses would want to build on parks if this proposal was granted.

Moeraki resident Fleur Sullivan, who grew up in Oamaru, said there was not a lot of green space left and what was needed to be protected.

Former Waitaki district councillor Jan Wheeler strongly opposed the proposal, and said the park had been used as a sports ground, walkway and playground for 160 years.

This would be travesty if allowed to proceed. St John provides a commercial contract to run its business and tenders rigorously. If St John were to lose its contract in Oamaru would there be a clause to hand the premises over to the new provider? Answer YES, it has to. And if & when the ambulance service in NZ does nationalise, we will then have a govt dept in a park. SAY NO WDC. Back to the drawing board.