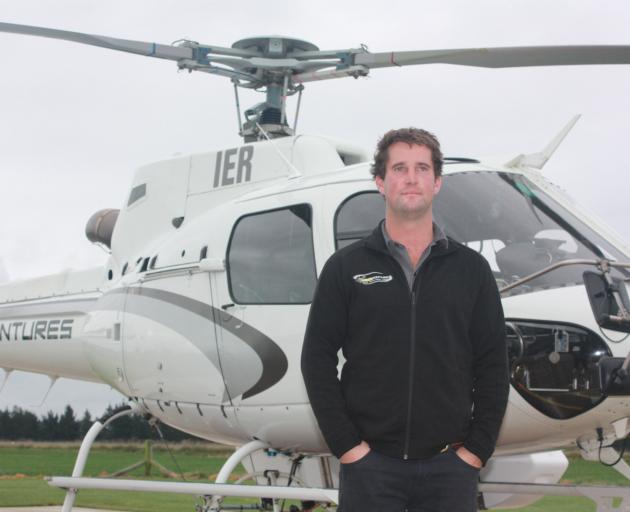 Helicopter pilot Matt Irving, of Kurow, has been awarded an Australian Bravery Decoration after a dramatic rescue two years ago. PHOTO: GUS PATTERSON
A Heliventures pilot awarded an Australian bravery medal for rescuing two men from a flooded river says he “just happened to be the right person there at that time”.

Matt Irving was working as a pilot at a mine in Australia’s Northern Territory two years ago when he received a call about two men who were stranded in rising floodwaters.

The two travellers had attempted to drive their campervan over a bridge to get to a nearby pub, but had stalled after driving into rising floodwaters on the Tablelands Hwy.

Having clambered onto the roof of their campervan, the men had been trapped for 24 hours as floodwaters rose around them.

They were only discovered when a local publican went down to the McArthur River to check the water level.

The publican called the police, who contacted the mine to see if it had a helicopter available. Mr Irving was then contacted and asked if he could pull the rescue operation off.

He and a member of the mine’s rescue team, John Waerea, jumped into a nearby helicopter to see what they could do.

Together with other emergency services personnel, they devised a rescue plan.

Mr Irving carefully manoeuvred his helicopter between trees and delicately hovered above the campervan.

From there, Mr Waerea was able to jump on to the slippery roof of the campervan that was being rocked by the fast flowing river.

Despite rapidly deteriorating weather conditions, and rising floodwaters threatening to dislodge the campervan, Mr Irving flew the helicopter back to the stricken vehicle and one of the stranded men was assisted aboard. He returned and repeated the procedure to collect the second stranded man, and then twice more to collect the rescue equipment and the rescuer.

“It’s something you have to do smoothly and gently, and with trees being so close I didn’t have the room to move in there,” Mr Irving said.

“It was dicey .. this was right at the end of the day so it was getting dark, and it was their wet season so there was rain and clouds.”

Despite the high stakes, Mr Irving said he was focused on what was going on around him.

“You need to back yourself before you do things like that . I knew I could do it.”

The two men who were rescued were “stoked”. They had started to give up hope, he said.

“Because they had been there for so long they got into the alcohol,” he said.

“To be fair, if the floodwater hadn’t have got them, the crocs would have.”

A representative from the mine nominated Mr Irving and Mr Waerea for an Australian Bravery Decoration, for their acts of bravery in hazardous circumstances.

The bravery medal Mr Irving has been awarded is the third-highest Australian Bravery Decoration.

“You are just doing what you do.

“Everybody has their skill set, and I just used mine.”

Mr Irving would travel to Darwin to receive his medal when that was possible. The Northern Territory was his “home away from home”.

“When you go out on a job, you’ve always got a swag and the tools to get you home.”

Mr Irving, who grew up in Kurow, returned to North Otago a year and a-half ago to work as a pilot for Oamaru-based Heliventures.

“I’m enjoying being back, the water is clear and you miss the mountains.”