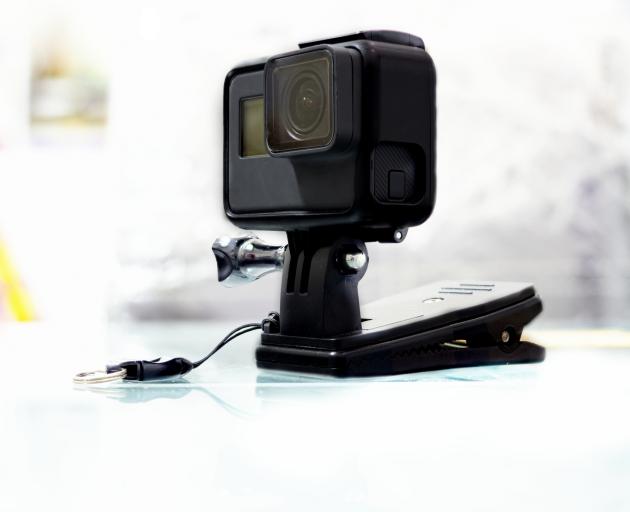 The activity he captured was stored in the GoPro’s memory card which was then streamed to his cell phone. Photo: Getty Images
An Oamaru man who set up a hidden camera to secretly film five women has been sentenced to eight months’ home detention.

William Andrew McLellan (20) appeared in the Dunedin District Court this afternoon after pleading guilty to five counts of making an intimate visual recording.

The women whose privacy he had violated all spoke of the anger and distrust that had remained after they had been informed of the offending.

More than one of the victims – all of whom have name suppression - was in the midst of university exams when they discovered what had happened, and they required special consideration when it came to their studies.

Another woman said the thought of what happened “disgusts” her and had affected her ability to work.

She recalled breaking down in front of customers while doing her job simply because she was working alone.

“I feel myself looking around for a camera wherever I go,” she said.

Another said she had recently discovered that McLellan had been viewing her Instagram posts, despite the court process.

“I don’t think you know the extent of what you’ve done,” she said.

The covert filming, which happened in 2019 and 2020, featured 29 separate recordings, the court heard.

McLellan created an alcove in a bathroom in which he placed a toilet bag.

In that bag he fashioned a small hole through which a small GoPro camera was able to film the unsuspecting victims as they used the toilet.

Judge Kevin Glubb outlined how the offending moved on.

McLellan later pierced a hole in the wall another bathroom, attaching the GoPro camera to film what happened.

The activity he captured was stored in the device’s memory card which was then streamed to his cell phone.

On there, he “systematically” saved and categorised the files.

Defence counsel Andrew Dawson said his client put his behaviour down to “depression, loneliness and curiosity”.

The court heard McLellan had since engaged with a counsellor who spoke positively of his engagement.

He was also undertaking a correspondence course in architectural engineering, Mr Dawson said.

Judge Glubb said the offending was an “extreme invasion of privacy”.

“It was your prurient interest, to satisfy your depraved needs,” he said.

“This is grave offending and it warrants serious condemnation.”

The judge imposed the sentence of home detention and added 100 hours’ community work to provide “a sting in the tail” and to get McLellan out of the house.

The defendant was to pay each victim $500 and an order for destruction of the electronic devices was made.

Judge Glubb refused the Otago Daily Times’ application to photograph McLellan because of the potential impact on his mental health.