The single-vehicle crash happened at the intersection of TY Duncan Rd and Shortland Rd. Photo: Daniel Birchfield
An Oamaru man who initially denied being the driver of a vehicle involved in a fiery crash that killed two teenagers in June has admitted he was behind the wheel.

Passengers Kaylem Rayne Webb-Hirst (16) and Michael Shelford Mauheni (17) died when the vehicle crashed and caught fire at the intersection of TY Duncan and Shortland Rds in north Oamaru on June 12.

Joseph 'Amanaki Lelei Fisiitoi Siale (19), who was arrested in Auckland in October, faced two charges of aggravated careless driving under the influence causing death, in the Oamaru District Court on Wednesday.

The police summary of facts said Siale was partying with Kaylem and Michael at a central Oamaru address on the evening of June 12.

Michael was not drinking, but Kaylem and Siale were. Siale was later found to have a blood-alcohol level of 59mg. The

legal limit for a driver under the age of 20 is zero.

Where they went and who was driving was not established by police in the aftermath of the crash.

He was behind the wheel of the Maxima about 11pm as it headed north at an unknown speed on Shortland Rd, a straight, roughly 2.5km-long stretch of road.

As he approached the T-intersection with TY Duncan Rd, Siale dipped the headlights but drove straight through the intersection.

The Maxima slammed into a pile of boulders at the front of a house with such force that the car ended up on top of them.

The impact of the crash rotated and shunted the car’s engine towards the driver’s footwell, causing a fire in the engine bay. The fire quickly spread.

The occupants of the property rushed to help but were unable to pull the two teenagers from the burning vehicle. Siale was able to free himself.

Michael and Kaylem suffered severe head and brain injuries and died at the scene a short time later. Siale sustained serious leg injuries and was in Dunedin Hospital until July 1.

According to the police summary of facts, Siale was familiar with the stretch of road, as he worked on a market garden near the scene.

He initially told police there were four people in the car and that he was a front-seat passenger, but changed his story and admitted there were in fact only three and he was driving.

Siale, who declined to be interviewed by police, was convicted by Judge Joanna Maze and will be sentenced on April 22. 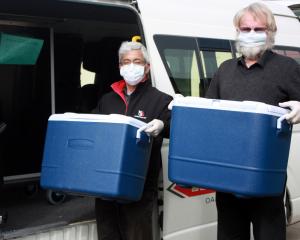