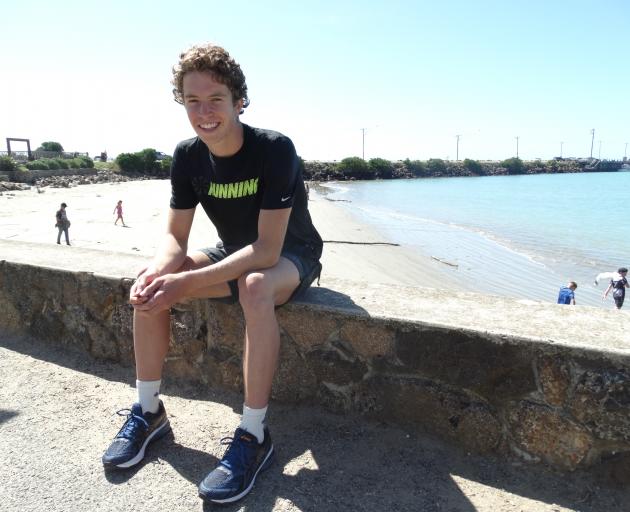 Austin Carter relaxes at Friendly Bay, Oamaru, after winning the men's open section of the Oamaru Triathlon yesterday. Photo: Daniel Birchfield
Austin Carter is a chip off the old block.

The son of 2004 Olympic gold medal-winning triathlete Hamish Carter is showing he has the potential to follow in his father’s footsteps, having won the open men’s section of the Oamaru Triathlon and Duathlon yesterday.

Austin (18) is relatively new to the sport — Oamaru was his third competitive multisport event — but did not let that stop him getting the better of a strong field.

"It was really good. I am just grateful that my form is coming through ... I only really started triathlon six months ago."

He did not consider any of the sport’s three disciplines to be a specific strength; to Austin, a former rower, it was more important to remain focused on what mattered most — getting to the finish line.

Austin, who is a first-year student at the University of Otago studying marketing with a minor in exercise and sports management, said his father only gave him advice when he asked for it and had never pressured him to take part in the sport.

As for whether he reaches the heights of Hamish, that remains to be seen.

"I am keen to keep going with it. With the support I am getting ... we’ll see where it takes me."

Adair Craik, of the Oamaru Multisport Club, said overall, the triathlon and duathlon events had received about 50 more entries than last year.

She was impressed with the talent on show, particularly in the secondary schools event.

"They are some of the best. We have the elite here ... which we love."