Other pumpkins not a patch on these 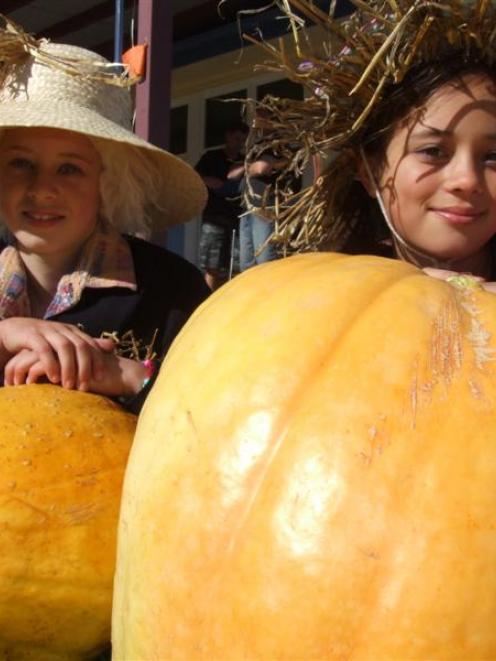 In fine, sunny conditions a large crowd attended the school's second pumpkin festival, which had a fair-like atmosphere, complete with stalls, dunking machine and chocolate wheel.

Pumpkins were everywhere: pumpkin soup and pumpkin-seed soap for sale, a competition for pumpkin recipes, carved Jack o' Lanterns, and the feature of the day, the weigh-in for the pumpkin-growing competition.

Parent Karen Weir said it was the second time the festival had been held and the idea was creative.

She and her husband were market gardeners and had access to the seeds.

The plants were sold as a fundraiser about October, and then people grew them through the summer, looking forward to weigh-in day.

Schools in North Otago were also offered pumpkins to grow.

Mrs Weir's own pumpkin only grew to about the size of a rugby ball, but she would have won the biggest-plant competition, she said with a laugh.

She was second last year.

The competition was won by Andrena McCarthy and Cathy Watson, whose 59.5kg entry was exactly 1kg heavier than last year's winning pumpkin.

School administrator Julie Evans, who turned 20kg of pumpkin into soup, had been to a pumpkin festival in the United States.

She said she was thrilled with how everyone supported Ardgowan's event.