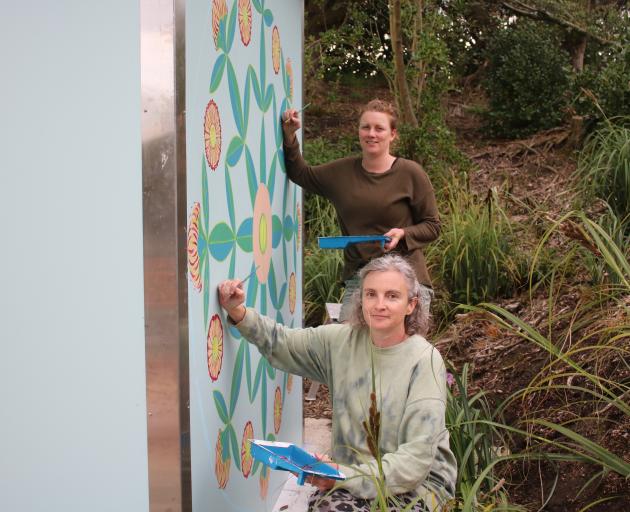 Natalie Carpenter (front) and Tracey Vickers paint a mandala on a wall of the Campbells Bay toilet block. PHOTO: KAYLA HODGE
Sometimes connections are made in the strangest places.

For Waitaki artists Natalie Carpenter, Tracey Vickers and Darren Tautari, painting a mural on the toilet block at Kakanui’s Campbells Bay was what brought them together.

Over the weekend, Carpenter and Vickers painted a botanical mandala, representing the 70-year old rata tree in bloom next to the toilets, on a wall at the northern end of the block. The rata flowers were then painted on the front of the toilet doors, depicted as blowing towards the southern end, where a big wave was painted, closest to the ocean.

Carpenter had engaged with the Kakanui community about their vision for the mural.

"We bounced ideas off each other and got the feeling of it all," she said.

It was important to her the mural was something that "reflects the area really well", and she enjoyed helping people make the connection between the rata and the mural.

Many residents stopped by during the two days of painting, and the trio loved being able to tell the story of their work, Carpenter said.

"It’s more about the scenery down here because it’s so beautiful."

Having Tautari paint the waves was significant as he had a close connection to the sea, she said.

Tautari said he loved bringing the "big wave" to Kakanui. The former full-time artist moved to the coastal North Otago town about a year and a-half ago, and had spent most of his time focused on surfing.

"It’s just been great getting back into art again," he said.

The mural was funded by the Waitaki District Council.