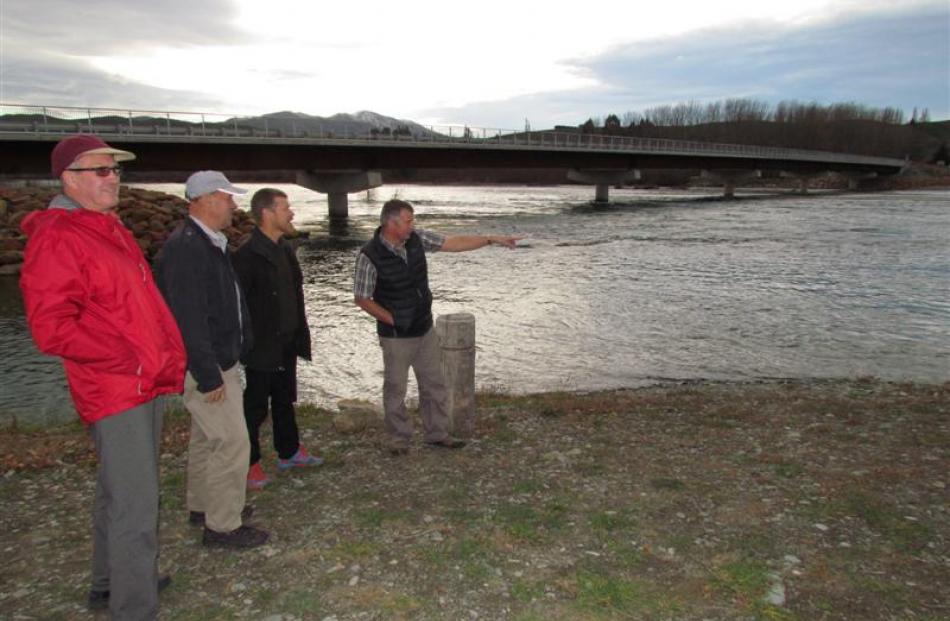 Members of a panel of commissioners to hear changes to a water allocation plan for the Waitaki River (from left) panel chairman Gordon Whiting, commissioners Edward Ellison and Andrew Fenemor, took a tour of the river yesterday with Environment...

A collaborative approach to resolving issues with a 10-year-old water allocation plan for the Waitaki catchment will be under scrutiny at an 11-day hearing which starts today in Oamaru.

A panel made up of three independent commissioners has been appointed by Environment Canterbury to consider submissions on Plan Change 3 to the Waitaki catchment water allocation regional plan, prepared by a five-member board appointed by the Government.

The allocation process in 2005 followed major debate over the Project Aqua power scheme proposed by Meridian Energy Ltd between Kurow and State Highway 1 which would have had a big effect on future water available from the lower Waitaki River.

The change to the water allocation plan proposed now is not as contentious as the original plan which received 1300 submissions - this time there is about 550.

But many of the submitters this time are those who took part in the original process, some of whom say changes being proposed now breach what was a contract between community groups in 2005.

That includes changing the minimum flow in the lower Waitaki River, which is likely to be the most contentious issue this time around.

The 2005 set a minimum flow of 150cumecs at the sea, the plan change proposes flows of between 102cumecs and 144cumecs, depending on the time of year.

Yesterday, the panel toured the Waitaki catchment and starts its hearing today in the Oamaru Opera House. It will sit until Thursday morning, then return from June 22 to 26 and August 3 and 4.

Overall, the plan change is aimed at addressing the review of replacement of existing resource consents, some of which have no minimum flows or are below the 150cumecs limit minimum flow at which abstraction must cease.

When those consents come up for review, they will have to meet the minimum flow in the plan which, some say, will affect the reliability of the supply of water for irrigation.

Other changes proposed to the plan have resulted from consultation and negotiations through the Lower Waitaki-South Coastal community committee, resulting in agreement on some of the issues.

Apart from the minimum flow, other changes proposed are allocating 11 cumecs to Ngai Tahu for mahinga kai enhancement from the agricultural allocation, providing more security for electricity generation consents held by Meridian Energy and Genesis Energy and providing certainty for renewal of existing resource consents, mostly for irrigation.

Another issue the plan change addresses is the volume of water allocated between the Waitaki dam and Black Point for agriculture.

In the original plan, it was set at 150million cubic metres of water a year, but confusion over original consents, including water from mining rights, meant the figure was less than what was actually being used and left none for future use.

It is proposed to increase the volume to 200million cubic metres.

What: Hearing on plan change 3 to the Waitaki catchment water allocation regional plan.

• Increasing the irrigation allocation between the Waitaki dam and Black Point.

Edward Ellison (commissioner): Otakou farmer. On the Government-appointed board which drew up the original 2005 Waitaki water allocation plan.

• Those making submissions today: From 10.45am: Environment Canterbury, Otewai Holdings and others, Linn Koevoet.