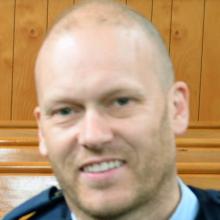 Jay Morriss
More than a dozen counterfeit banknotes have been presented at Oamaru businesses within the past week, police in Oamaru say.

Eight fake $50 notes were used in one case, and one and three notes on two occasions — 16 in total.

Constable Jay Morriss, of Oamaru, said the majority of the counterfeit notes were used at clothing or footwear retailers.

"They want to get them out of their hands and into something more tangible, whether it be something they can use themselves, or be on-sold."

The notes were an older-style example and while he said they "look good" from a distance, there were some obvious giveaways on closer inspection.

"The main difference with the counterfeit money is that it’s paper, as opposed to regular currency. We’ve been doing what we call a rip test — if you give them a wee rip, or try to, the fake ones will rip, and you won’t be able to rip a real note because it’s that paper and plastic mix."

Others were a clear window "quite crudely" stuck on to the right-hand side of the note and on the lower left, a fern that was usually white and clear was instead white and shaded.

Although it had not been established if the notes were linked to those circulating in Timaru, where a 31-year-old man was arrested as part of an ongoing police investigation on Wednesday, Const Morriss said it would be "unusual if it isn’t".

He advised all businesses that handled cash to be vigilant and report any suspicious notes to police.

"Just be extra cautious in terms of any money but this seems to be $50s and there have been reports of $100s in other towns."

No notes are believed to have been presented in other North Otago townships.