Railway footbridge to be restored 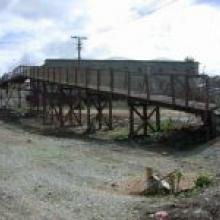 Oamaru's historic railway footbridge, which will be restored. Photo by David Bruce.
A pedestrian bridge that has been closed for years because it is dangerous, is to be restored to provide access from Oamaru's historic precinct to the Oamaru Harbour.

The restoration work, estimated by a consultant to cost up to $200,000, is the first major project undertaken under the Harbourside plan, which wants to develop Oamaru harbour.

However, the chairman of the Waitaki District Council's harbour and heritage subcommittee, Gary Kircher, hopes the project can be done for a lot less cost.

Service clubs and volunteers have already offered to help, and applications will also be made for grants.

The subcommittee has a budget of $100,000 allocated to the project.

It is not known when the pedestrian bridge was built, but its design and construction is the same as many of those throughout New Zealand that have disappeared.

The bridge was a safe access to Friendly Bay and the harbour when the railways goods yard was in use and spanned several railway tracks.

Now there is only one track, used by Oamaru Steam and Rail for its excursion trains from Itchen St to the red sheds at the harbour.

Cr Kircher said the first step would be to put up scaffolding then strip back the red lead paint on the bridge. Work could then start on restoring and repairing the railway iron framework and timber.

He hoped work could start before the end of June.