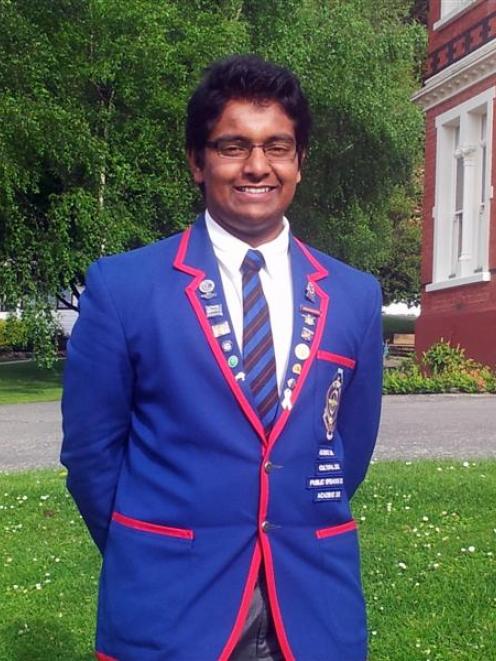 Scholarship winner Jibi Kunnethedam, at St Kevin's College. Photo supplied.
Oamaru pupil Jibi Kunnethedam yesterday said he was ''ecstatic'', after successfully competing with more than 1000 other high school pupils from around New Zealand for a sought-after scholarship to the country's top-ranked university.

Only 100 scholarships are awarded each year and he said he ''thought he would have a shot'', because of his academic record, which included 112 excellence credits at level 2, with seven subject endorsements at excellence - double the number required to apply for the $5000 scholarship.

He said he was ''ecstatic'' and ''really proud'' with his scholarship.

''It reduces a lot of the financial pressure of studying at university. Otherwise, I wouldn't be able to go to Auckland. It's just opened the door to another exciting adventure.''

Jibi, who moved from Christchurch to Oamaru in 2000, received an Otago Daily Times Class Act award in September. He intends to study biomedical science at the university and hopes to study medicine the following year, as part of his desire to become a doctor.

The teachers at St Kevin's College had provided ''huge support'', he said.

''Each teacher has gone above and beyond what is required in the syllabus.''

Acting principal Kerry Ryan said the scholarship was both rare and highly sought-after, and had involved competition from leading academic secondary schools.

''We are very proud of Jibi and this scholarship is thoroughly deserved. ''His level of achievement throughout his time at the college has been consistently excellent across the board.''