By Ruby Heyward
0 Comments
Coming together and showing love to those touched by cancer was what Oamaru’s Relay For Life was all about.

Despite a gloomy sky, 24 teams were primed and ready for the relay, the first in North Otago since 2015.

But before the 189 participants could start their laps around Takaro Park, the relay was christened with an honorary lap by cancer survivors and carers.

Among those in the honorary lap was Henry McHoull and his daughter Angela.

Mr McHoull donned both a green ribbon, meaning he had been a carer for someone with cancer, and a purple ribbon, which meant he was a survivor.

"My wife was diagnosed with a rare form of cancer in early 2018."

While he supported her through treatment, he was also diagnosed with with the disease.

"We went through it at the same time." 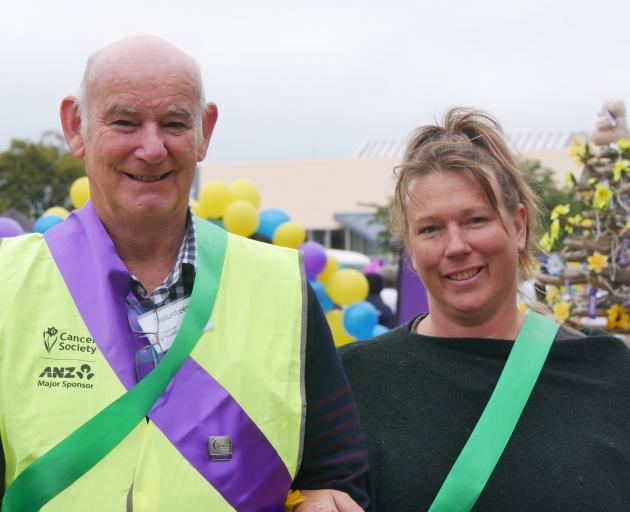 Cancer Society volunteer Henry McHoull and his daughter Angela both don green ribbons, identifying them as carers at Oamaru’s Relay For Life. PHOTO: RUBY HEYWARD
His wife Daphne died on September 6 in 2019, and three months later he was "given the all clear".

"It was our 46th anniversary two days ago."

He and his wife moved to Oamaru five years ago and Mr McHoull said he would not want to have gone through his experience anywhere else.

He did not know where he would be without his family, the cancer society, and the help of his community in Oamaru’s Blue Stone Dr.

Now a volunteer, he wanted to give back to the community that supported him and would soon start driving people to and from appointments in Dunedin and Timaru.

He hoped more men would join him, as he was the only male volunteer in the area.

Event co-ordinator Michelle Carson said Mr McHoull’s story was an example of what the society could do to help those with cancer, such as transport, wheelchairs, supportive care programmes, and accommodation.

The event went from 1pm until 6pm, completing the day with a candlelight ceremony.