On the road to recovery, injured rugby player is grateful for help after incident 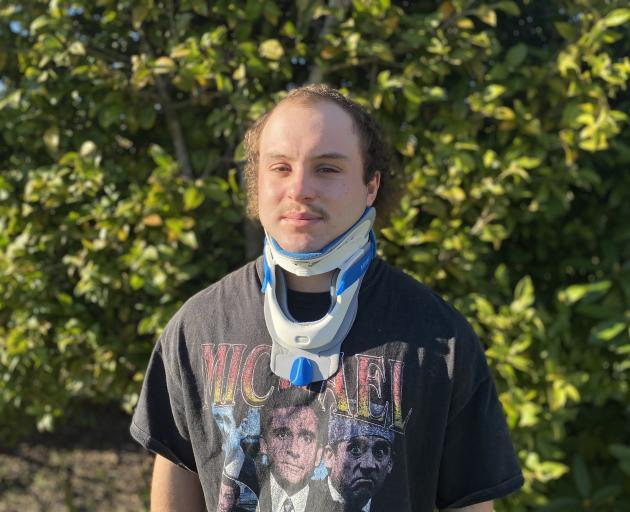 The 19-year-old is recuperating in a neck brace at his father’s home in Oamaru after the May 7 incident, which happened during a game against Athletic Marist at Whitestone Contracting Stadium.

He was "definitely not" calling it quits on rugby, and said if he did not make a full recovery by next season, he was aiming to be back playing the following year.

Of the incident, Mr Wilson said he remembered kicking the ball, and when he went in for a tackle, his head hit the player’s hip.

"I kind of just fell straight to the ground," he said.

"I went to move, then my whole left side of my body was all tingly. I told the physio, and she said ‘don’t move’, so I stayed as still as I possibly could.

"I think the tingling went on for like 10 minutes, and then I started feeling pain in the middle of my back."

Old Boys and Athletic physiotherapists Philippa Masoe and Kerry Whitburn were praised at the time by his father, Mark, for their actions following the incident.

Their quick thinking had made all the difference between "what could have been, and what actually was", he said.

They held Mr Wilson’s head, placed him on a stretcher and moved him into the medical room until an ambulance arrived.

He was then flown by helicopter from Oamaru Hospital to Christchurch, where X-rays revealed one fracture in the cervical spine and two in the thoracic. The fractures were minor, so surgery was not required, and there was no damage to the spinal cord.

Mr Wilson was in the middle of a builder’s apprenticeship in Dunedin, which had now been put on hold.

He would stay in Oamaru until he was closer to a full recovery, which he thought might take four to six more weeks.

"It might be a while before I can go back to work. They said I can do light duties, but there’s nothing really light I can do."

He needed the neck brace for at least six weeks, and was due for another check-up in Dunedin on June 16.

The sportsman, who has also played touch rugby for New Zealand, knew he had been lucky.

"I was thinking the worst, but I’m glad it didn’t come out to be that way."

The support he had received from family and friends had been great, he said.

"People coming around, messages, just everything — especially from Old Boys. The boys have been real helpful, going to watch the games and stuff. It’s been good."

Some days were better than others, and he was still quite sore at times. The injury had created quite a big upheaval in his life, but he appreciated being where he could be looked after.

"It’s not too bad. It’s good to be at home and have support from Dad and grandparents and Mum and stuff, rather than being in Dunedin."

The days were long and "very, very boring" with a lot of TV-watching and plenty of time to think.

"There are a lot of things that go through my head, during the day — I wish it had never happened, wish I’d never kicked that ball or chased it, anything like that."

Mr Wilson was grateful to everybody who had come to his aid that day.

"Especially Philippa and Kerry. If it wasn’t for those two, it could have been a lot worse.

"Thanks to the St John staff that helped me to the helicopter, and just everyone for being supportive, and helping out."