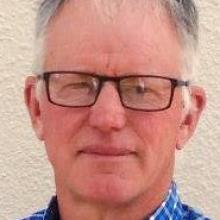 His parents had shifted from Nenthorn to Dunback, which allowed him to travel on the  school bus to attend East Otago High School.

When he completed his bachelor of science degree  in chemistry, together with mathematics and chemical engineering, at the University of Canterbury, he undertook secondary teacher training at the Christchurch Teachers College.

Mr Jenkins then took a few months off from study, during which he

drove a truck  for Macraes Transport.He took up his first teaching position at Aparima College, Riverton, in 1979.

His mathematics teacher from Waitaki Boys’ High School, Alex Familton, had been appointed  principal at East Otago High School and wanted Mr Jenkins on his staff to teach subjects that included mathematics, economics, technical drawing PE, and even English.

Mr Jenkins said  he would teach mathematics and all the other subjects offered, but not English.

The smaller East Otago co-ed high school had a friendly atmosphere where he could get to know all the pupils quickly, which appealed to Mr Jenkins.

After that, he went on to become deputy principal at Fairlie High School.

He had an "open door" policy as principal and he also had an advantage in the East Otago community that everyone knew him.After 11 years, Mr Jenkins decided to step down as principal, and mathematics came to the fore again. The head of mathematics had moved to another school, and Mr Jenkins applied for and gained the position, classroom teaching being his real love. He also became senior dean, principal’s nominee and  teacher in charge of video conferencing, and has been responsible for mentoring senior pupils.

Despite deciding to retire this year, Mr Jenkins is not finding it easy to do so.

As yet, the school has not been able to find a suitable replacement for him, and he  has agreed to continue as head of mathematics for term one of 2018.

When he does finally retire, Mr Jenkins plans to go fishing, spend time with his grandchildren, travel with his wife Bernadette and  reduce his golf handicap.