In April 2017, Otago Community Hospice revealed it had bought the former Anaro Investments building at 343 Thames Highway, opposite Orana Park, after a five-month search for a prominent base. 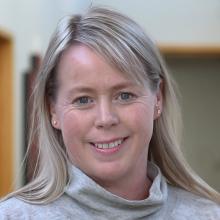 Ginny Green
Otago Community Hospice chief executive Ginny Green said work to redevelop the building had progressed well and the major work was set to begin within the next month.

When complete, the building will include a hospice retail shop, spaces for patient appointments and counselling sessions, an area for training and education, and staff offices.

Mrs Green said the aim was for the building to be open for business on September 1 and she was pleased the project had the support of the public.

"It's really exciting. We've had so much interest from the local community ... It's a great local project that everyone seems to be getting behind."

A building consent application had been lodged with the Waitaki District Council for work that involved the removal of walls to create a more open retail space and larger training and seminar area.

The south side corner of the building would also be made more open and act as the shop's main entrance.

The building work was out for tender and "four or five" expressions of interest had been received, Mrs Green said.

Other minor building work had been completed, including the back of the building being lined to accept drop-offs for the shop.

A mid-2018 date was originally planned, but was pushed out after the organisation was required by the council to obtain engineering reports for the building to go with the final plan drawings.

The high-profile building, which the hospice took over in July, was bought with income generated by several fundraisers, including the Portside Punch in June 2014, which was driven by Oamaru publican Sally-Ann Donnelly and raised more than $118,000, and three North Otago Boar and Stag Musters, which raised a combined total of about $29,000.

Other funds were raised by the district's Lions clubs, individual donations and a significant bequest from the late Nigel Wilson.