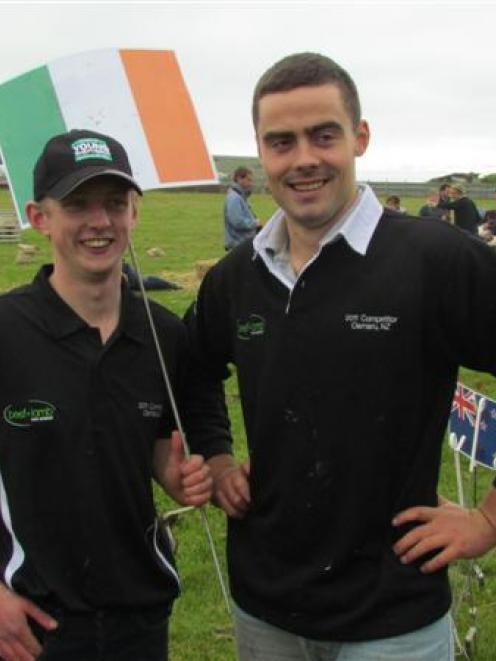 A pity, then, that the Irish contestants at the World Young Shepherd Challenge in Oamaru have return airfares to their homeland with the Australian carrier.

The pair's journey from Kilkenny, where they study at Kildalton Agricultural College under accompanying tutor John O'Connor, was to take 36 hours, but had stretched to about 100 by the time they arrived.

They had left Ireland on Friday morning local time and did not arrive in Oamaru until 9pm New Zealand time on Tuesday . The delays were caused by a long-running industrial dispute that has resulted in flights grounded globally.

Neither hesitated when asked whether they would consider booking with Qantas in the future.

"Never again," Mr Murphy said. "We have to fly home with them, but after that very doubtful."

The delay, though, brought them a degree of celebrity in Oamaru yesterday.

"We're more famous for not being here," Mr Murphy said.

Despite the setback, they were "happy enough" to be given an opportunity to complete Tuesday's events yesterday.

New Zealand representative Peter Klaassen, of Lincoln University, praised the quality of the field after taking out the Shepherds Sprint with Hamish Best, of Massey University, yesterday morning at the Oamaru Showgrounds.

They made up a great deal of time while consuming the Weet-Bix, which other teams - especially the English - found difficult to stomach.

New Zealand was known for both rugby and farming and "to take them both out would be good", Mr Klaassen said.

Beef and Lamb New Zealand people and capability manager Diane Falconer said the event could be run every four years in conjunction with the Rugby World Cup, as sheep-farming nations also tended to play rugby.

"The unity of the backgrounds, especially for the English-speaking competitors, mean they can just sit around and have a good yarn," she said.

It was the first time the challenge had been held and its future would be contingent on its success. This year was the perfect time to launch the contest as it was "absolutely" a strong time for the sheep industry with high wool and meat prices.

The winners will be announced on Friday, the best-performed individual earning a $15,000 international professional development scholarship.

More than 400 jobs to go at Qantas