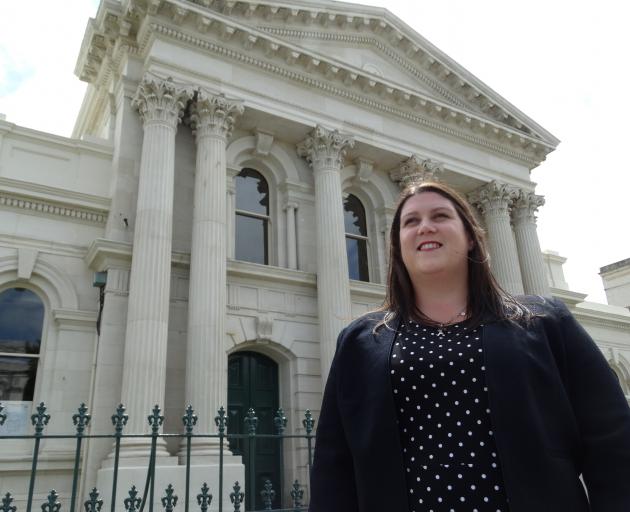 Despite practising law in Oamaru for six years, Dean & Associates solicitor Emma Middlemass will work in the historic courthouse for the first time today when court services return to the building for the first time since November 2011. Photo: Daniel Birchfield
For one Oamaru solicitor the return of court hearings to the town's historic courthouse today will be a proud moment. For another, it is a homecoming of sorts.

The Oamaru District Court will sit at the lower Thames St courthouse for the first time in more than seven years after the 1883 building was closed in late 2011 after being classed as earthquake-prone, before court services were relocated to Timaru, then the nearby Oamaru Opera House and finally to a portable facility in Humber St in 2014.

An almost $900,000 Waitaki District Council project to earthquake-strengthen and refurbish the courthouse and its surroundings started last February and was completed in early October before an official opening ceremony, attended by Justice Minister Andrew Little.

For Dean & Associates solicitor Emma Middlemass, it will be the first time she has represented clients in the town's true judicial home.

''I was admitted to the bar in May 2012 and began practising soon thereafter. At this time, the court was already closed. I have been providing court services for close to six years without once appearing in the courthouse. As a solicitor and born and bred Oamaruvian I feel a great sense of pride, satisfaction, gratitude and honour to continue Oamaru's proud legal traditions of providing services at the historic courthouse,'' she said.

Miss Middlemass said a return to the courthouse meant that court services could be provided in a ''suitable and functional environment''.

''The Ministry of Justice tried to provide a suitable alternative. However, the reality is that the porta-court was hopelessly inadequate. It is small, stuffy, safety concerns exist, the waiting rooms are poor and the cheap ambience created by it is, in my view, not appropriate for the serious matter of dispensation of justice within the community.''

Ngaire Alexander, of Alexander Law, has been practising law in Oamaru for more than 20 years.

She said the return would not have been possible if not for the efforts of the council and Oamaru lawyer Bill Dean, who criticised an initial Ministry of Justice estimate of up to $6million to earthquake-strengthen the courthouse - a cost estimate ridiculed and disputed by the Oamaru community.

When the courthouse was transferred to Land Information New Zealand for disposal before the council took ownership, Ms Alexander was resigned to the fact the building might never be used for court services again and praised the council for its efforts.

In a statement, Ministry of Justice courts and tribunals group manager Jacquelyn Shannon said when court was not sitting, the building would be available for community use.

''When the courthouse is in use as a hearing centre, the ministry will set up the room as the court with its furniture and use portable technology to run the audiovisual links and speaker systems. When it is not in use as a courthouse, the community will be able to access the building for events approved by the council and the ministry.''