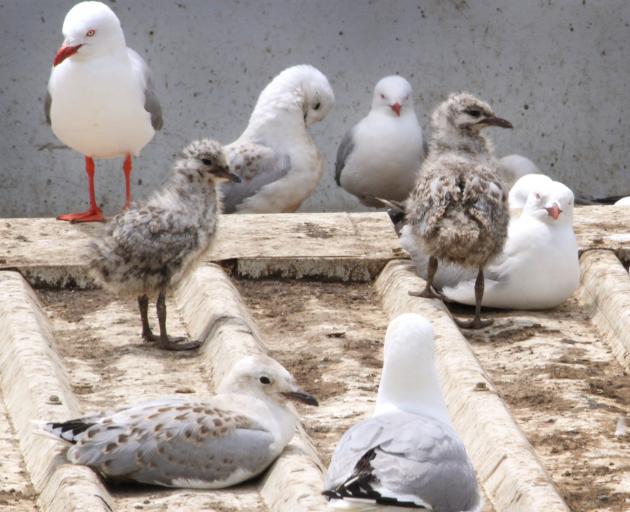 Plans are under way to find a solution to cleaning the mess created by red-billed gulls in Coquet St, Oamaru. PHOTO: HAMISH MACLEAN
A solution may have been found by the Waitaki District Council to tackle the unsightly mess being left on the footpath in Coquet St by endangered red-billed gulls.

Scores of birds nest on rooftops in the central Oamaru street opposite Countdown Oamaru where at one time hundreds of birds nested during breeding season until the company installed various deterrents to prevent the birds from nesting on its building again.

This week, he confirmed one option had been tested and was "so successful no other methods have been trialled at this time".

The process involved cleaning footpaths with a high-pressure water hose and vacuum truck.

It will now be assessed as to how often cleaning may need to be done and what the likely cost will be.

"We are currently watching the build-up return to decide when the next cleaning would need to occur. This will inform us on how often cleaning would be required, and therefore what the annual costs could be. At present the cost is being managed within the network maintenance activity which is a redirection of council road maintenance expenditure."

Although the testing had not hit ratepayers in the pocket, maintenance programmes were funded by a combination of rates and NZ Transport Agency investment, he said.

"The full cost effect will not be known until the number of cleans per year are confirmed. At the time we have settled on how we clean, and how often, we will be able to report on the cost to ratepayers of the gull cleaning programme."

The issue came to the fore earlier this month when former Oamaru Borough Council deputy mayor and councillor Dr Ron Sim called for the birds to be ‘‘exterminated’’ and a law change made to allow that to happen.

Under the Wildlife Act, once nests have been formed they cannot be removed and the birds cannot be culled.