Staff, town wait in fear for axe to fall 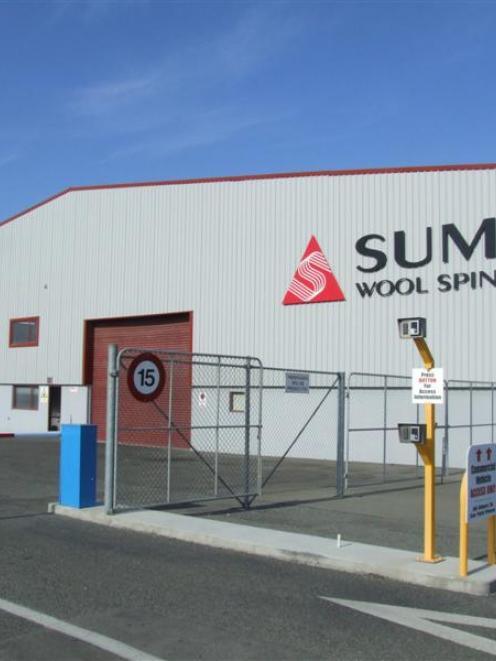 The entrance to Summit Wool Spinner's Weaver St site. Photo by Sally Rae.
Oamaru residents are hoping not too many jobs are lost when the town's second major employer, Summit Wool Spinners, tells staff tomorrow afternoon at a meeting in the Elim Church the effects of a lack of orders.

Staff fear jobs will be lost, but have no details except for a recent email that said the company could not carry on the way it had been and there was an "unfortunate need to restructure".

That left groups such as Work and Income and the Engineering Printing and Manufacturing Union only able to prepare for the aftermath.

Union lead organiser John Gardner did not know what the outcome would be until he, along with staff, attended tomorrow's meeting.

"I don't have any problem with that. It is not proper we know before staff. As far as I'm concerned, the company is handling it as well as it can," he said.

Mr Gardner will meet Summit management again on Monday to talk about the over-capacity and how it related to staff.

Summit, owned by the Japanese giant Sumitomo Corporation, has faced a difficult period since it reduced its 12-hour shifts to 10 hours in November last year.

Mr Familton said he had "absolutely no knowledge" what tomorrow's announcement might be.

Summit was one of the key companies in the town and, if anything happened to it, the community would "be the poorer for it".

"Let's hope that any restructuring does preserve their presence in the town," he said.

Waitaki MP Jacqui Dean said there had been a lot of discussion within the National caucus about businesses such as Summit.

Given the company had more than 100 employees, it was in a position to take advantage of the nine-day working fortnight subsidy, if that was what the union, workers and management decided to do.

"If it comes to redundancies, and I hope it doesn't . . . the Government has put in provisions to help workers transition from redundancies into whatever their future holds for them," Mrs Dean said.

Summit Wool Spinners was a good employer, cared about its employees and had a stable workforce.

What was outside its control was the export market for carpet.

She was sure the company was confident export markets would pick up again and orders would come in.

"Whatever measures they take in the short term, they are going to be very careful about," she said.

Work and Income had not heard what was going to be announced, but regional labour market manager Paul Casson said the organisation was ready to respond once an announcement was made.

"We've got no inside information around what's happening there," he said.

Work and Income worked with employers and unions and looked at what support it could offer to affected workers, along with job opportunities in the region.

It was an "unknown quantity" at Summit at this stage.

Work and Income had a redundancy support team and was "prepared all the time".

There were 90 people on unemployment benefits in the Waitaki district and there were seasonal fluctuations around the region.

The job market changed every day.

The dairy industry had been struggling for personnel for a long time but New Zealanders were now looking at the industry as growing and as a potential career.

The industry was strong in North Otago, he said.

The emerging viticulture industry in the Waitaki Valley could need 10 to 15 workers for two to three weeks at the peak of harvesting from late April, Pasquale Viticultura's Geoff Turner said yesterday.

However, that would depend on a number of factors, including individual winemakers' requirements and the weather.

Next year it would need "some serious labour", he said.

That same year, Abco Meats was placed in receivership, with between 60 and 70 staff laid off.

It was later bought by Lean Meats Ltd.

Operates in 66 countries at 148 locations.