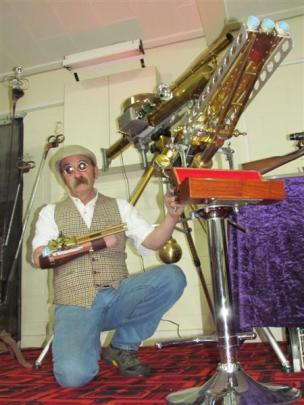 Warren Phillips, from Christchurch, brought some of the ''prototype failures'' of weapons he has created to the Steampunk Market in Oamaru on Saturday. Photos by David Bruce. 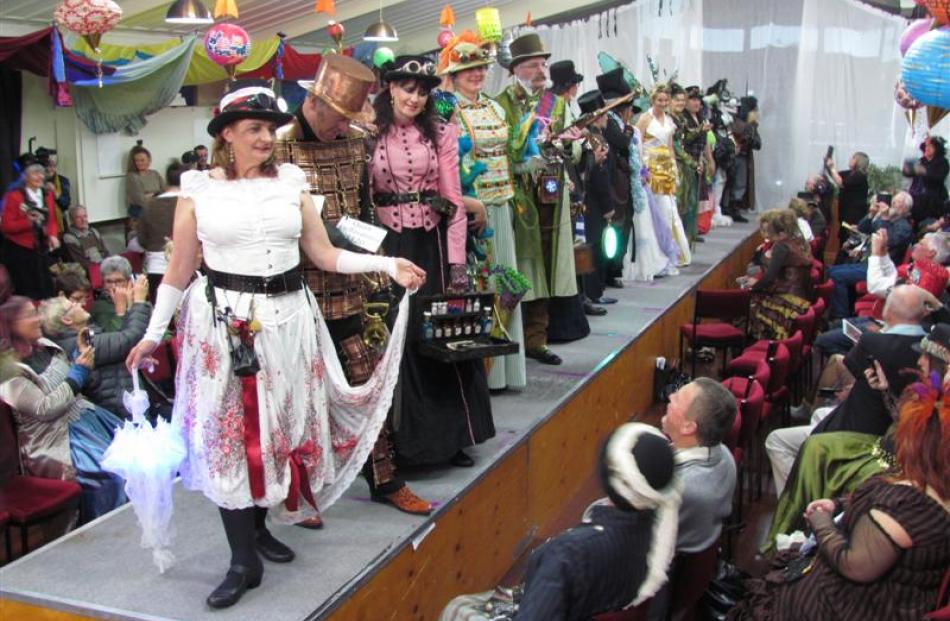 The 17 contestants in the Steampunk Fashion Parade line up in Oamaru yesterday.

Steampunk is giving Warren Phillips an excuse for a second childhood.

''It's going back to when you were a 10 year old, when you would have loved a gun like that,'' he said, pointing to some of the weapons he has made and had on sale for between ''a few hundred dollars'' and $1500 at the Oamaru Steampunk Market on Saturday.

He describes his beautifully crafted creations as ''failed late Victorian prototypes'' but they reflect his past as a photographer, gunsmith and dabbler in antiques.

Steampunk weapons were ''a cross pollination'' of antiques, firearms and history, with science fiction thrown in.

''Steampunk rules are fairly flexible. They are what you make them, so everyone has their own interpretation,'' he said.

He started making his weapons about a year ago, producing 12 and selling ''about half a dozen''.

Each takes a while to design and then make, ensuring they are unique rather than coming from a production line.

The Steampunk Festival this year had one of its biggest turnouts, with people from throughout New Zealand and others from England and the United States.

They added colour to the Oamaru Steam and Fire Festival on Friday night.

After Saturday morning's market, the next big event was the League of Victorian Imagineers mess and dinner, which also staged the teapot racing, on Saturday night.

One of the festival organisers, Helen Jansen, said people were enthralled by the 24 teapots that raced up and down in the Loan and Merc building for about two hours. The inaugural race last year had 12 racers. Entries doubled this year and it is becoming a growing attraction.

The supreme winner was Garnet Quiggley, of Wellington, as Madam dee Rinkell, who also won the scientist/inventor section.

The adventurer/explorer section was won by Leslie and Jane Craven, of Wellington, as Colonel Sir Julius Hawthorne and Mrs Hudson the younger; work wear by Irene Sparks, of Oamaru, as Miss Pink Eraser; and evening wear by Michelle Webb, of Dunedin, as Faery Du Absynthe.

The festival ended last night with about 160 people at the Gala Ball.