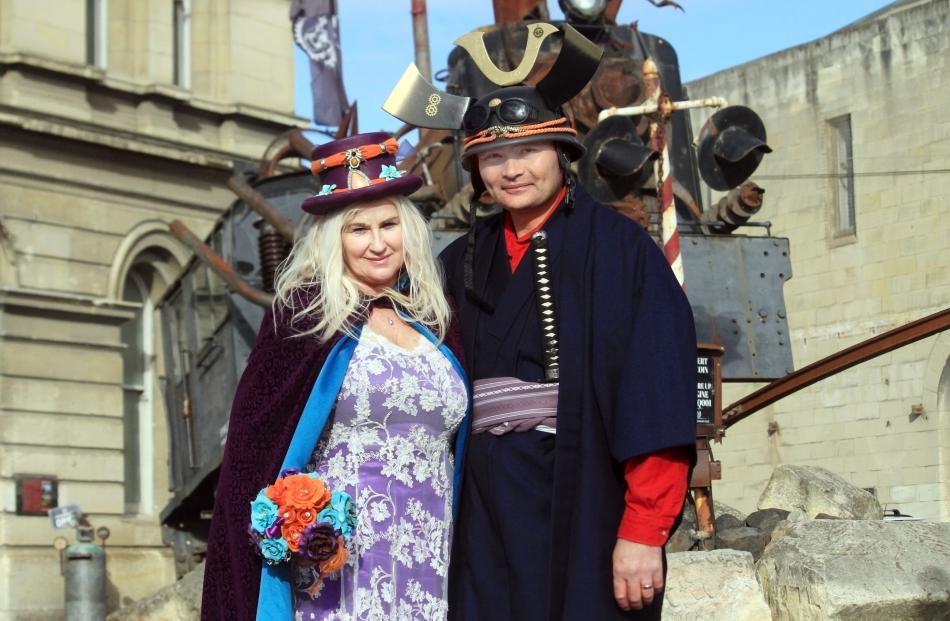 Debbie and Anthony John McCormick seal the deal after their wedding ceremony in the Long Room at the Loan and Merc, one of scores of events at the 10th Steampunk NZ Festival in Oamaru. Photos: Hamish MacLean 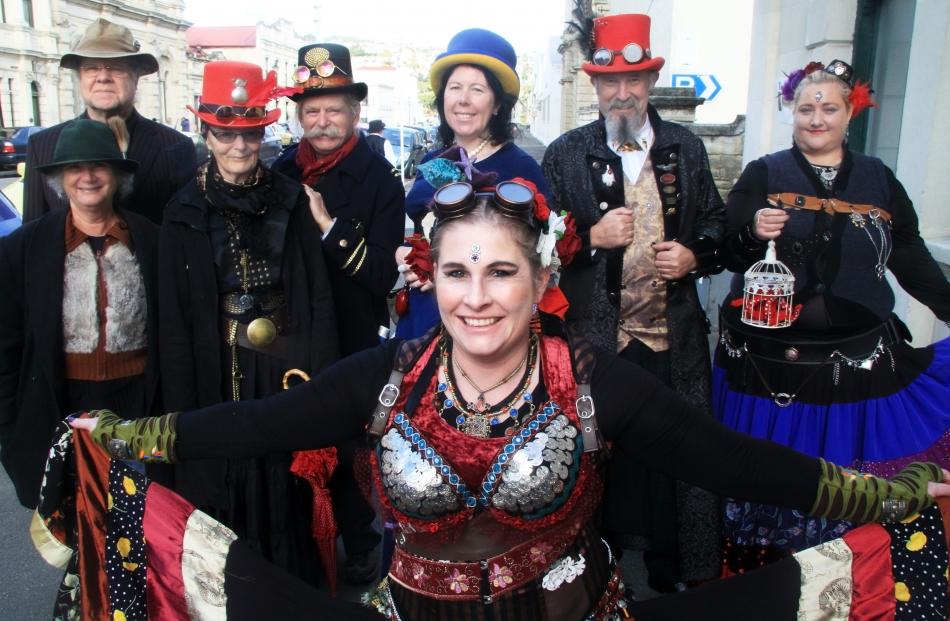 Dressing up and standing out at Oamaru's Steampunk NZ Festival are Niki Maritz, of Christchurch, front, Charlene Herring, back left, Ralph Traber, Odette and Chris Hill, all of Christchurch, Sabine Archer, of Canberra, Australia, Allan Beecher, of... 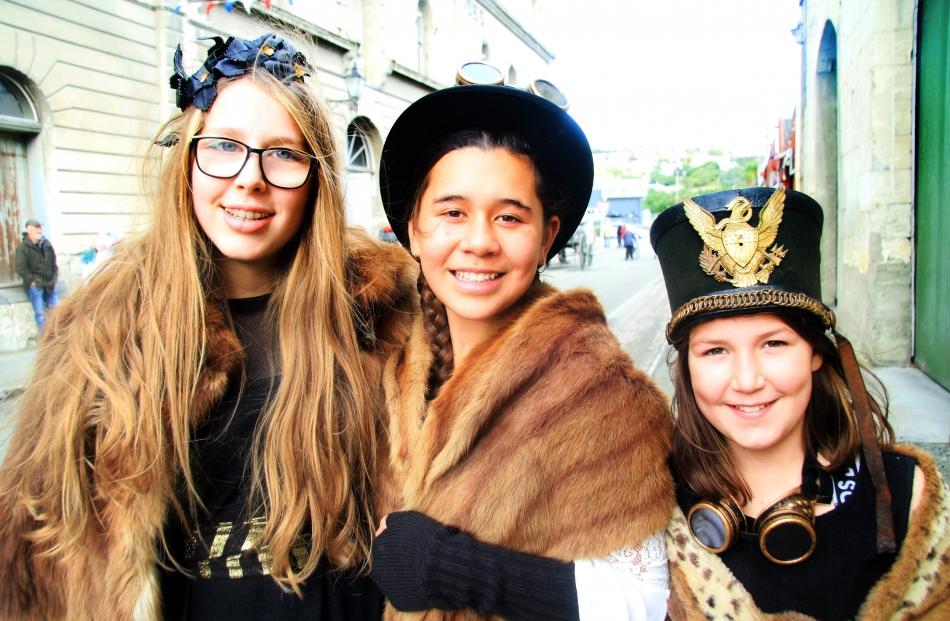 Proving that steampunk appeals to young and older alike are Isla Menzies (13), left, Ava Bella Stowers (11), and Elyse Menzies (10), all of Christchurch. 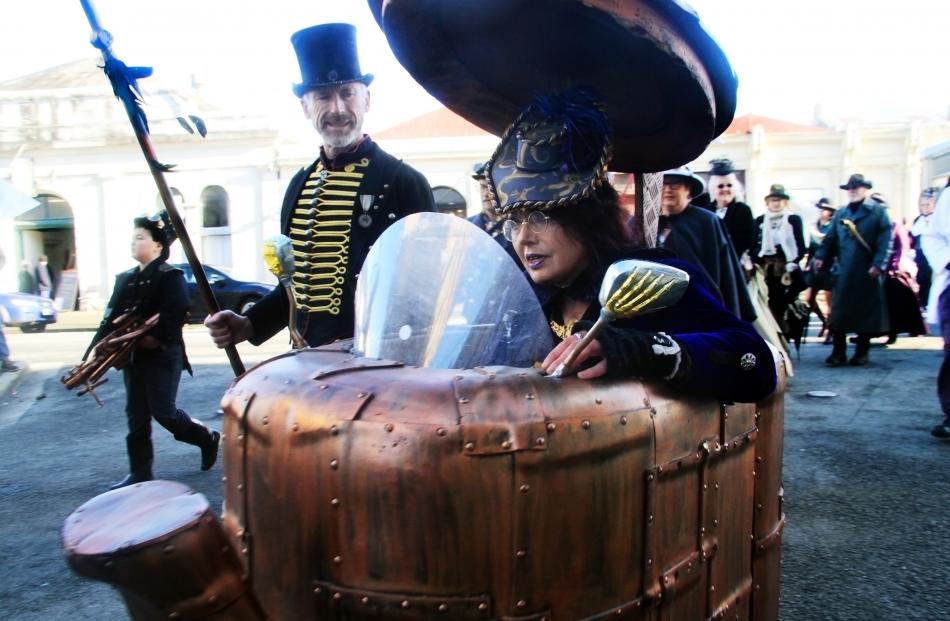 With a mobility scooter that is the envy of her peers Kat Douglas gets around in style at the Steampunk Parade. 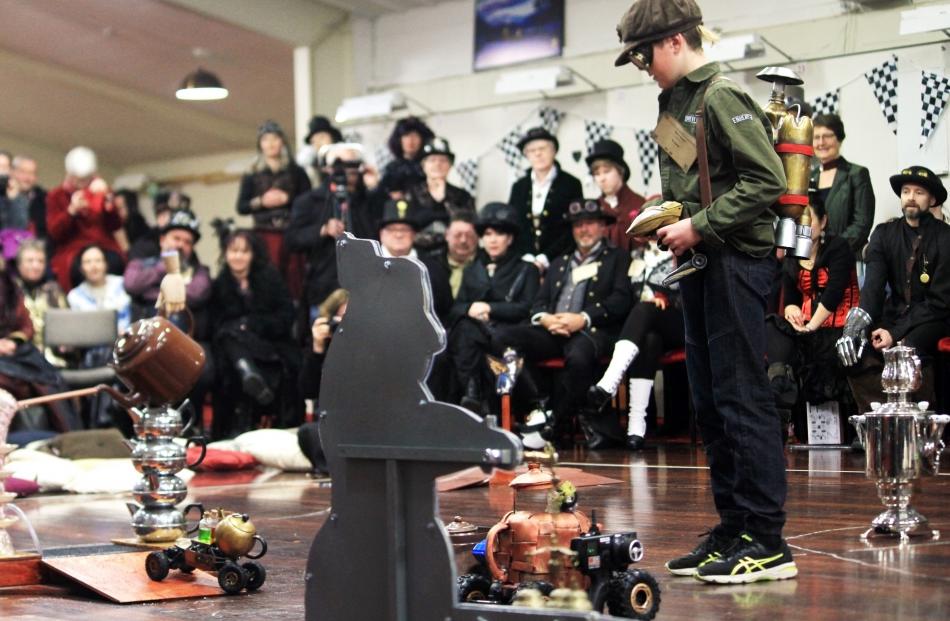 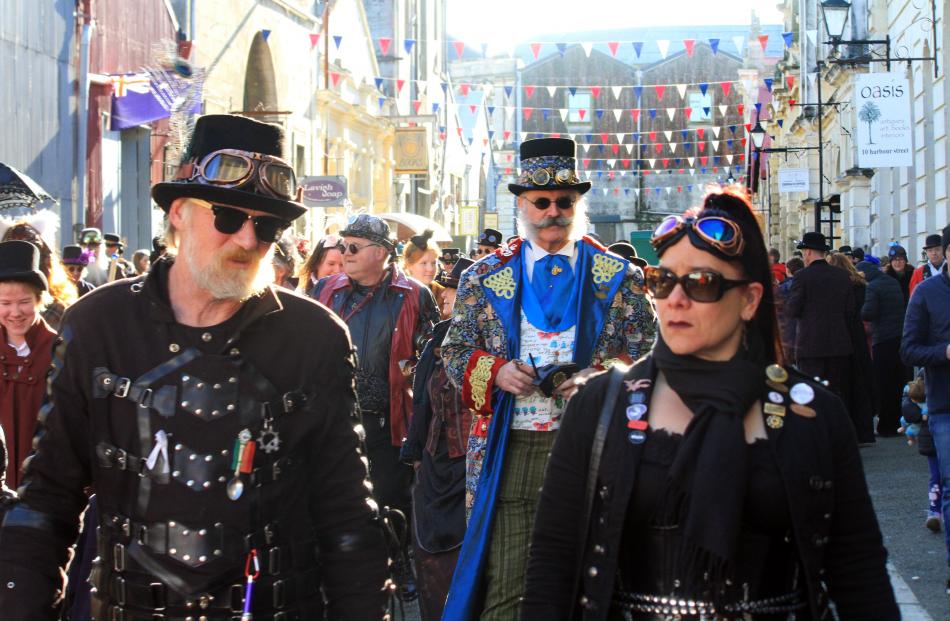 Oamaru's historic Harbour St is filled with steampunk attitude on Saturday. Oamaru's steampunk festival-goers" have been called "probably most colourful steampunk group in the world".

It was a day to remember; it was a wedding like no other.

The "unforgettable" wedding of Debbie Bradley and Anthony John McCormick, of Christchurch, was one of roughly 30 events at the 10th anniversary Steampunk NZ Festival, in Oamaru, at the weekend.

After the couple led hundreds of steampunks in the Steampunk Parade through historic Oamaru on Saturday, the soon-to-be-wed couple greeted the crowd during the opening ceremony in lower Wansbeck St, before being whisked away for the ceremony in the Long Room at the Loan and Merc in Harbour St in front of 40 friends and family, curious steampunks and an assortment of cameras, including a television crew from Australia covering the wedding.

"It's been an adventure and it's really been quite awesome as well," Mrs McCormick said minutes after the ceremony.

"I feel it's really important just to express yourself how you really want to. Being able to be driven up the main road in a parade is pretty special."

She admitted having nerves on her big day, and she even "had a bit of a meltdown earlier on".

"I had my hair in rollers all morning to get my hair really beautiful ... and then we were in this car with no roof. It was really windy and cold - all my hair just came out within five minutes of being in the car. It was so upsetting."

Kat Douglas, also of Christchurch, said in her experience the steampunk community had proven to be "pretty damn inclusive".

Ms Douglas attracted attention in her own right during the parade as her mobility scooter, converted into a giant brass teapot, rolled through the streets. But the steampunk movement was accessible for anybody with a disability.

"You might have to use ... a walking stick, or a wheelchair, or a mobility scooter - why not have fun with it? Creativity is a good thing."

One of the main events was created explicitly to allow those with a disability to take part in the fun.

In 2014, Simone Monty developed teapot racing - converting remote-controlled cars into teapots or other fanciful creations - so her friend Donna Rose, who used a motorised wheelchair to get around, could be included, Steampunk NZ Festival International Teapot Racing Championships master of ceremonies Bob Archer, of Neenah, Wisconsin, explained.

After Oamaru's James Glucksman, also known as Ewell Rudy Day, crashed into the Dilmah Teapot Racing Championships trophy, knocking its top off - and he was heartily booed by the crowd of about 200 at the Oamaru Club - Mr Archer scolded the raucous crowd.

"You don't boo at entertainment," he said to a chorus of laughter.

Iain Clark, also known as Agent Darling, of Oamaru, addressed the 260 steampunks at the Victorian League of Imagineers' 10th annual mess dinner at the Loan and Merc on Saturday night to celebrate a decade of the steampunk festival in Oamaru, now the largest of its kind in the southern hemisphere.

"Who would have thought Oamaru would have been able to do something as large as this - and it has endured for 10 years," he said.

"We are probably the most colourful steampunk group in the world - the men have turned into real peacocks. We've created a real monster."