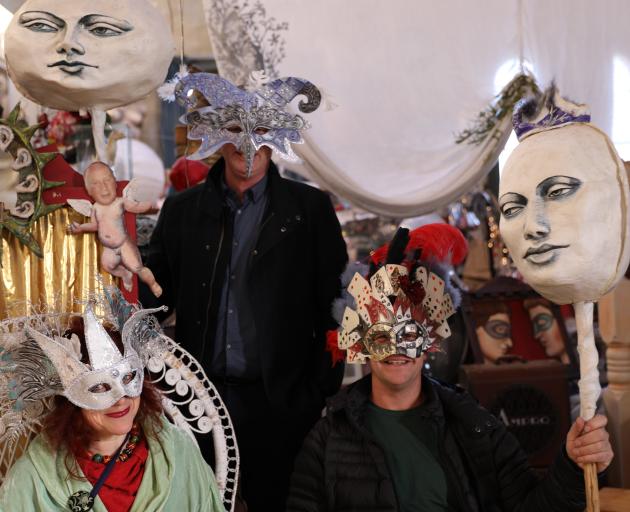 Trying on masks ahead of the Midwinter Night’s Dream street party are (from left) Oamaru artist Donna Demente, Waitaki Mayor Gary Kircher and community resilience fund chairman Jeremy Holding. PHOTO: LISA SCOTT
It will be a magical night of music, merchants and masks.

The Midwinter Night’s Dream street party, to be held in Oamaru’s Harbour St on August 21, was yesterday announced as the first recipient of funding from the Waitaki District Council’s (WDC) community resilience fund, one of three funds introduced to help the district recover from the Covid-19 lockdown.

Event organiser Donna Demente was "rapt" to receive $4835, which would be used to pay Oamaru and out-of-town acts performing at the free event.

The street party was dreamed up by Ms Demente and a team of volunteers after this year’s Fire and Steam and Harbour Street Jazz & Blues festivals were cancelled due to Covid-19.

"I think people are hanging out to have a party and to be able to mingle again — so I was determined to do something," Ms Demente said.

It was a festival event, with a masquerade and lantern parade, music, food and pop-up stalls, but it was "entirely different" to the usual winter events in Harbour St, she said.

"It’s evoking the ambience of the [historic] buildings, rather than trying to make it a modern thing," she said.

Performers include Karin Reid and Alex Wolken, Ari Freeman, Jenny Mitchell and Dee May and the Saints.

It was "really important" the event was free, Ms Demente said, but people who could afford to pay an entry fee were encouraged to make a donation in the lead-up to the event. Donations were being collected at Riverstone Larder and Rose’s General Store.

Oamaru businesses and members of the public were welcome to have pop-up stalls at the event.

"The deal is, it’s completely pop-up. You have to bring your own table, your own lighting
— everything.

"We just like the idea of having that street merchant feel as well."

One of Oamaru’s "real assets" was its volunteers, and everyone had been generous with their time and energy to help organise the event, she said.

"We don’t know what the turnout will be — we’ve really got no idea — but there’s a good buzz happening."

The event will start at 6.30pm, when a masquerade and lantern parade from the RSA gardens arrives at the Victorian precinct. Anyone was welcome to join the parade from 6pm. Prior to the event, Ms Demente has been holding mask and lantern-making workshops at the Grainstore Gallery on Monday nights.

The council had received "a good variety of applications" for its $300,000 community resilience fund, chairman Jeremy Holding said.

"We’re looking forward to seeing this funding contributing to community resilience as we move through the Covid recovery phase," Cr Holding said.

Applications had also been received for the $300,000 economic resilience fund, but the council had not received any applications for the $30,000 mayoral relief fund, for one-off assistance for individuals and families who were experiencing serious hardship due to Covid-19.

Application forms for the funds are on the WDC website.