Supermarket symbol of faith in town 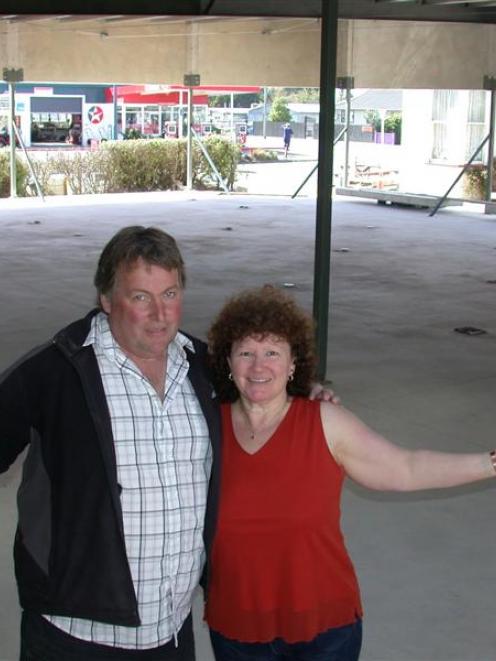 John Dimelow (left) and Corrine Martin inspect the supermarket they are building at Hampden, showing the space available compared with their Hilltop Store. Photo by David Bruce.
A Yorkshire couple were on the "big OE" from England when they passed through Hampden and decided to put down roots and enjoy a good lifestyle by the sea.

Now their passion and confidence in Hampden's future have prompted them to build a new supermarket facing State Highway 1 next to the store, at a time when there is a tendency for New Zealand's small rural towns to be losing services.

"Small provincial rural towns are the heart and soul of New Zealand. This is what New Zealand is famous for," Mr Dimelow said.

"We are adding a key part to the infrastructure of the town, with the feeling things will snowball.

"I feel Hampden is the jewel in the crown of the Waitaki district, with huge potential."

Hampden was being discovered as an affordable coastal town to live in or have a holiday home.

They started trading at the Hilltop Store in March 2001.

In the past two years, business had expanded to the extent the store was too small.

Hampden has a permanent population of about 360 people, but is growing, with three new houses planned so far this year.

Both towns have large holiday populations and attract many tourists.

Mr Dimelow sees the catchment for the new supermarket stretching from Shag Point, possibly as far north as Maheno and Kakanui.

About a year ago, after obtaining consents for the new supermarket, Mr Dimelow started preparing the site and, since then has worked on the building alongside Invercargill builder Trevor Withington, who has a holiday home at Moeraki.

The supermarket will be about 440sq m, compared with the existing store's 170sq m.

It will include storage, the supermarket, bakery, administration and staff areas, postal centre and mail sorting.

Asked the cost of the new supermarket, Mr Dimelow replied with an old Yorkshire saying: "fair words money" - basically that was his business.

The existing store and house will either be removed or demolished, to make room for a car park.

Landscaping will have a nautical theme, to reflect the coastal township atmosphere.

Mr Dimelow said that, "working smarter" with a more modern infrastructure and technology, the supermarket should be able to operate with the same staff as the existing store - three full-time equivalents, along with the two owners.

He hoped the building would reach the "lock-up" stage in the next two months, be fitted out over winter and start trading in September, with a grand official opening at Labour weekend in October.