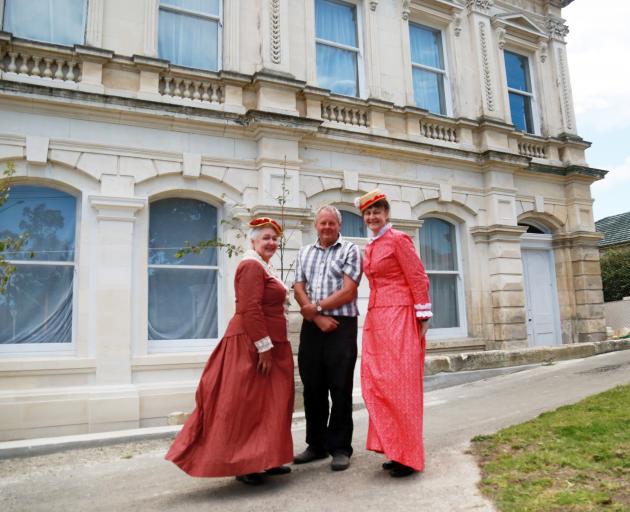 On Friday, Mr Murton opened the doors of the historic Oamaru hotel to the public, taking tours around the landmark building he is slowly restoring to its former grandeur.

When Mr Murton bought the 1879 building about a year and a-half ago to restore it as his home, he knew he had a big job ahead of him. The category 2 heritage-listed building had been stripped and altered by previous owners and vandalised as it lay vacant for many years.

"The place has been vandalised, stripped and uncared for over the years — so there really isn’t terribly much left inside," he said.

But he had always loved the building — he could see its potential and did not want to see its further decline or demolition.

"It’s a grand building, and the outside is really quite impressive, isn’t it?"

The restoration process had been slow. Building supply chains disrupted by Covid-19 had blown out timeframes and everything came at a cost.

But while there was "a long way to go", the changes he had made were already making a huge difference.

The building had a new roof, all of the upstairs windows along Wansbeck St had been replaced, new ceilings were going in, a new handrail for the staircase was going up and there had been major progress on the plumbing and electrical work.

"It’s just getting it back to basics," he said.

"From leaking to draughts and ventilation — all those things."

Every year, Mr Murton hosts a group of friends for the Oamaru Victorian Heritage Celebrations. Despite the cancellation of this year’s celebrations, his friends still travelled to Oamaru from Invercargill for the weekend, and given the interest in his renovation project, he came up with the idea of offering tours of the hotel during what would have been heritage week.

He planned to use the proceeds from ticket sales on the continued restoration of the building.

"A lot of people have wanted to see what it’s like," he said.

People would get a better understanding of the scale of the project — seeing "the rustic look, the bare bones and the holes".

Mr Murton is receiving support from the Waitaki District Council and Heritage New Zealand. He has renovated houses on a small scale before — but nothing like this.

"This is a little bit more daunting," he said.

The Junction Hotel has had many uses over the years. It was built for John McKay in the late 1870s and originally contained 34 rooms.

Mr McKay declared bankruptcy not long after the hotel’s opening and in 1885 the property was sold by the Scottish and New Zealand Investment Company to Oamaru hotelkeeper Patrick Corcoran for £1750. It was then operated by a succession of licensees.

In June 1904 there was a fire at the hotel, and damage to the building was considerable.

It was later used as a general store, a vegetable store, a bottle store, a second-hand bookshop, by a furniture removal firm for storage and as flats.