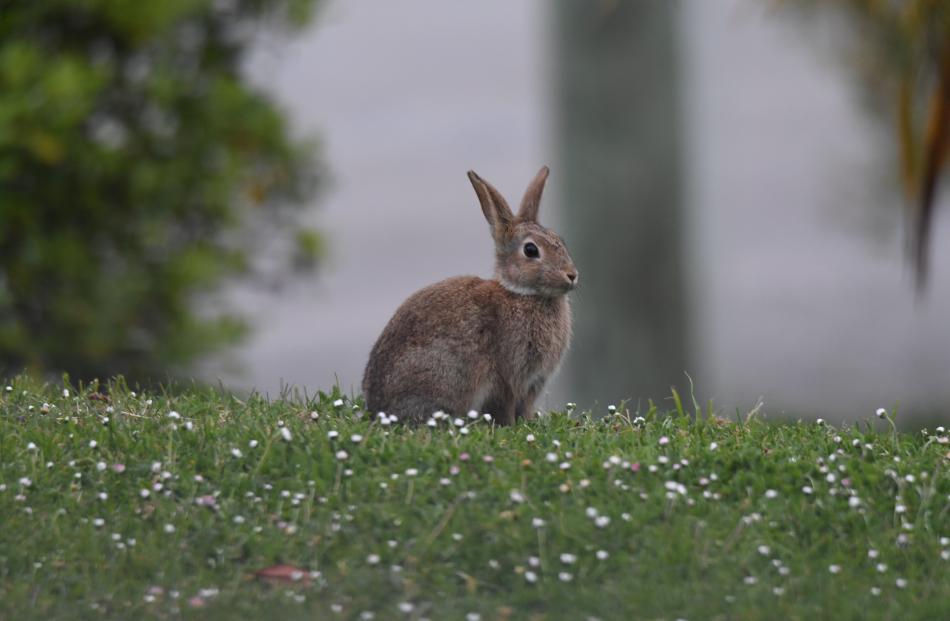 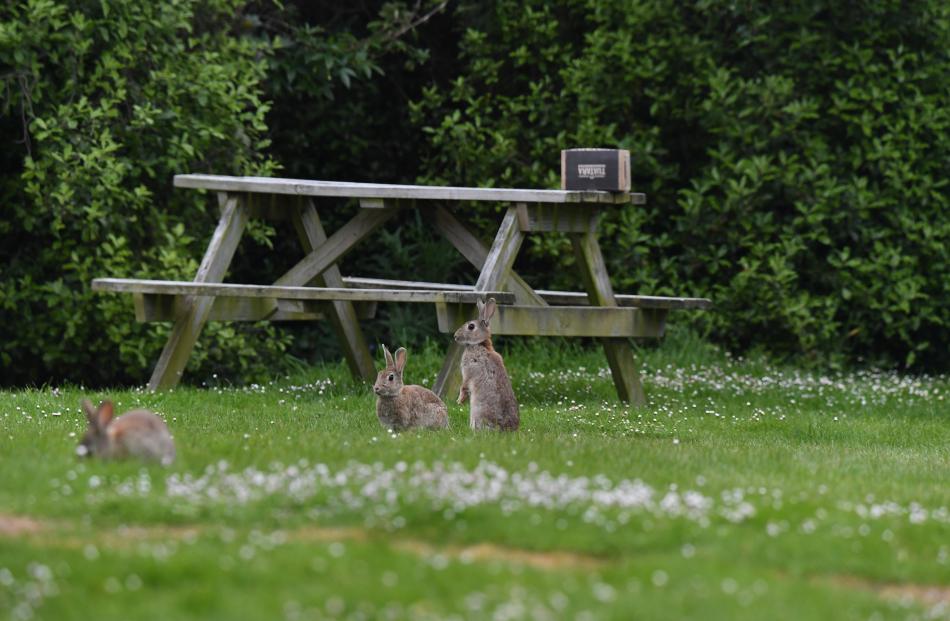 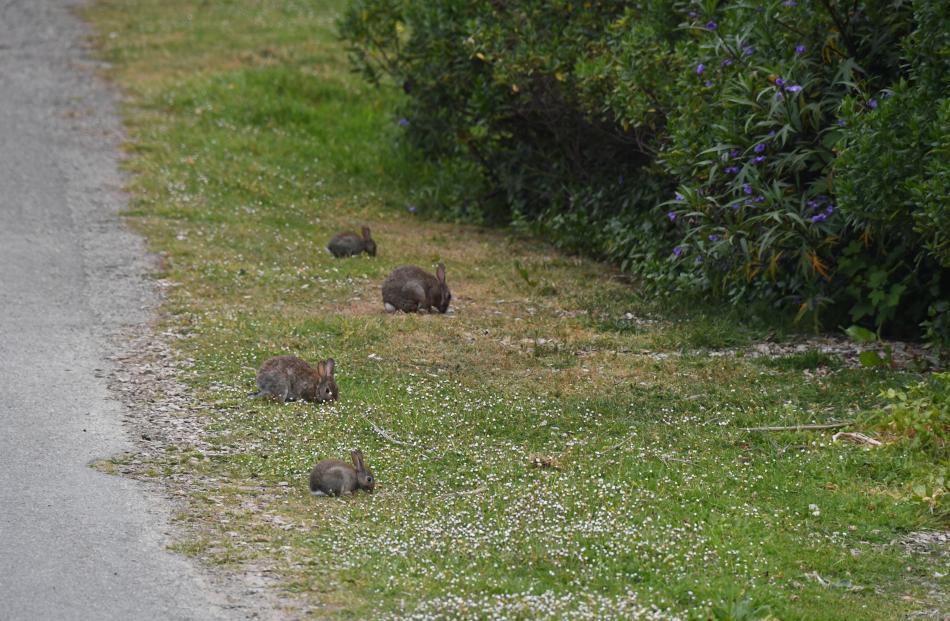 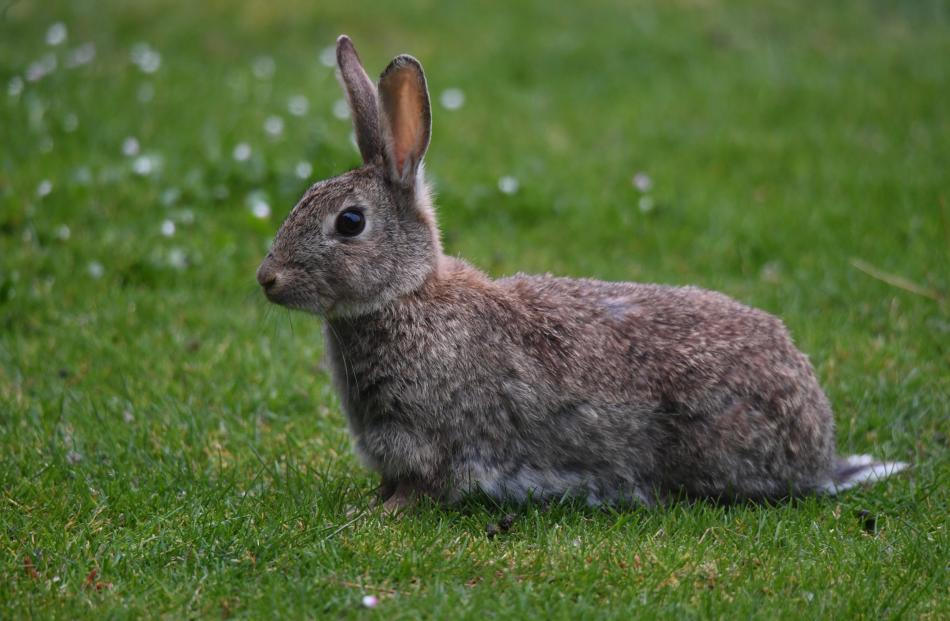 Moeraki is overrun with rabbits.

Rabbit numbers on the Moeraki peninsula have  skyrocketed and are at "plague" proportions, residents say.

The township of Moeraki is "just crawling" with rabbits this spring, locals say,  and dozens  can be seen  at the local camping ground, on roadsides, in gardens and anywhere they can find food.

Not permitted to shoot or poison rabbits in urban areas, locals are left waiting for the release of a new strain of the rabbit haemorrhagic disease virus to help control them.

The Otago Regional Council says it is the landowner’s responsibility to control pests, but residents spoken to by the Otago Daily Times say they have grown weary of the fight to control them.

Waitaki District Council Waihemo councillor Jan Wheeler, who lives on a farm on the peninsula, said the problem there was "shocking" despite her husband’s  efforts at rabbit control, and it was worse in the Moeraki village, which was "just crawling" with them this year.

"For every pair there’s been, there’s about seven babies running about. It’s a shocking problem. It’s been like this for about six years and it’s growing every year," she said.

In the middle of one day, he stood in the same spot on a Moeraki farm for  two and a-half hours and shot 46 rabbits, he said.

"There’s more rabbits in town than on the outskirts. The last thing I want to do is lose my firearms licence, but I reckon I could take out 1000 around town in a couple of weeks."

Rabbits on the edge of town had become gun-shy. While it was difficult to see the extent of the problem during the day, he could see "all eyes" while driving at night.

"They’re running across the road in droves."

Moeraki farmer Doug Stalker said he needed to cull 200 rabbits a week to manage their numbers over spring and summer, "and we’re losing". He moved from Central Otago four years ago and said the Moeraki rabbit problem was worse.

"We had rabbits there, but nothing like we’ve got here."

Mark Brady, who mows lawns in Moeraki, said rabbits had  devoured so much grass in some areas that it "didn’t need cutting". The rabbits were impossible to miss in the town,  Moeraki Tavern’s new owner Craig Brett said.

"There’s hundreds and hundreds of rabbits, big ones, little ones, fat ones, square ones, whatever. They’re everywhere."

Moeraki retailer Leanne French said the village provided an ideal environment, particularly given there were many areas where landowners were not in a position to control them.

"They’re up in the ...  holiday homes, where nobody lives ...  they are just happily hanging out on the front lawn.

"As an example, we live where there are nine 12-acre [4.8ha] blocks, and there’s only three permanent people that live here. There are so many other pieces of land where nobody ever comes, so nobody can look after it. That causes trouble."

Moeraki restaurateur Fleur Sullivan was more tolerant, saying the rabbits stayed out of her raised beds of silverbeet.

"While rabbit was not on the menu at Fleurs Place, she used to make an award-winning rabbit, venison and pickled walnut pie, when she was at Olivers, in Clyde — with imported rabbits.

"The hills were alive with rabbits and to make my pie I had to buy Chinese rabbit ...  $28 a kilo, with bones. If people were allowed to head-shoot  them all and sell them to me, I’d love it," she said.

An application to import the new strain of the rabbit haemorrhagic disease virus has been made to the Ministry for Primary Industries and is being consulted on at present.

The new strain  infects only the European rabbit and no other species.

Otago Regional Council director of environmental monitoring and operations Scott MacLean said  the virus, if approved, would be available by autumn next year and Moeraki would be a priority for its distribution.

The council had developed a communications and education plan that would be rolled out after the council had "an indication  about how the application to import goes", he said.

I for one am looking for land to shoot on and willing to provide my time for free.

Councils rabbit control policy is to write a stern letter to each rabbit explaining that there are too many of them and they really should control their breeding instincts for a year or two. This letter drop will be followed up in two years time with a detailed study to see if the rabbits are behaving themselves. Estimated cost is below $500,000 so it is very cost effective.

This will work won't it?

I had the same problem when I shifted to Palmerston. There were more bunnies than lambs most of the time. My neighbours trapped and shot constantly. Our two cats cleaned them out in about 2 1/2 years. My neighbours were anti-cat because they were concerned about them eating the bird life. They get the odd bird, the hawks get more. The virus might help, in the short term, but not long term. We still have the odd rabbit but nothing like Moeraki.