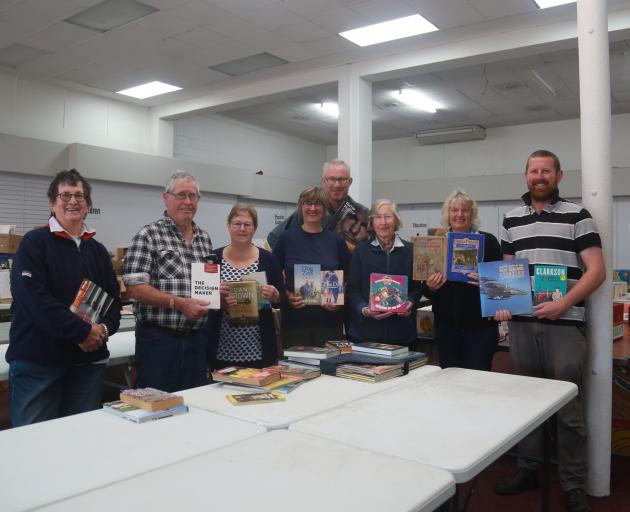 The Rotary Club of Oamaru started the official collection for its annual book sale last Monday, and volunteers have been busy sorting through all of the donations, before selling starts on May 23.

Bookarama convener Ele Ludemann said an amazing number of books had been donated already — including some "absolute treasures".

One of the "old and interesting" books volunteers had come across was a 140-year-old copy of The Family Friend. The book was presented to Eileen Cameron, for her "regular attendance" at Hampden School, with an inscription inside the cover dated December 22, 1882.

Mrs Ludemann believed it was the oldest book ever donated to Bookarama. It would be put up for special auction, and Bookarama volunteers were trying to find out more about it.

Rotarians started setting up for Bookarama in the old Noel Leeming building in Thames St last Saturday, with the help of Old Boys rugby players, who had been offering muscle power in the form of unloading and loading books from storage, for a donation towards the club.

The first day of accepting drop-offs was "total chaos", but Mrs Ludemann enjoyed sorting through all of the books and starting to organise them into categories from "A for animals" through to "W for Westerns".

A "bedsheet test" was applied to the books to ensure they were of a certain standard, she said.

If those sorting would not be comfortable reading a book in bed and having it touch their sheets, then they would not sell it.

Some books left over from previous events were kept for this year’s sale, while others had been donated to local organisations, such as the Oamaru Churches Food Bank, Oamaru Kindergarten Association, the Department of Corrections and the Waitaki Resource Recovery Park. Rotarians had also been picking up books for the Bookarama by request throughout the year.

The Oamaru community was always "very generous" with donations and its support for the annual sale.

Even with the rise of electronic books, Bookarama was still as popular as ever. Last year’s sale broke fundraising records, raising $40,000 for various local causes, including the new Waitaki Event Centre and the Oamaru Public Gardens playground upgrade.

"It’s lovely that people of all ages still read real books," she said.

Money raised from this year’s event would also go to the new Waitaki Event Centre, and other local causes.

"Everything comes from the community, and all the money we make goes back into the community one way or t’other."

Books can be dropped off at the sale premises between 10am and 2pm, Monday to Friday.