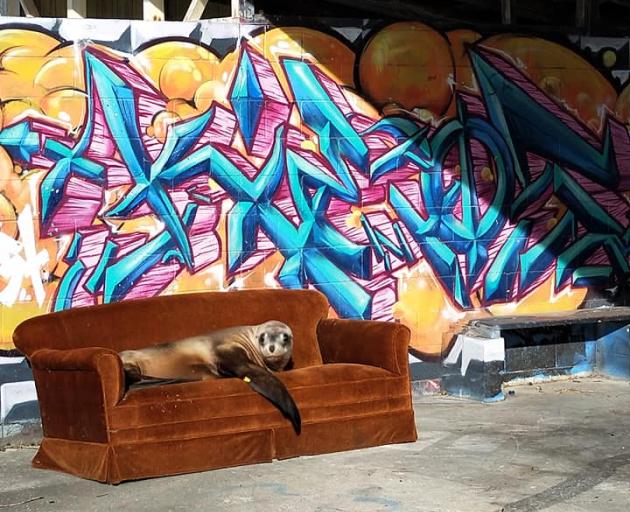 Holly Baylis, of Oamaru, was playing with her children Kayden (8), Tayah (4), and Beau Dungey (2), at the playground above the Kakanui River mouth when she learned a member of the nationally critical species was hanging out at the nearby disused changing rooms.

The children were looking for an adventure that day and so Miss Baylis took them for a wander and snapped a photograph of the unusually relaxed pinniped that soon went viral on social media.

"It just needs a cocktail glass in front of it.''

Doc spokesman Marcus Gibbs said because sea lions had an exploratory nature they could show up in ``odd places''.

But as the animal did not look to be distressed, in danger, or being disturbed, the department did not need to be contacted.

"It looks as though it's having a great time relaxing on that couch,'' he said.

Based on the yellow tag the animal was wearing, it was likely to be from Stewart Island where in 2018, after the annual pup count showed 55 newborn pups, the department declared the first breeding colony established on mainland New Zealand in more than 150 years.

If the department had a tag number it could provide more information.

But Mr Gibbs said while sea lions could look harmless and helpless they would defend themselves if they felt threatened.

They also carry potentially infectious diseases and can cause serious injuries.

"They also carry potentially infectious diseases and can cause serious injuries".
Just like humans.