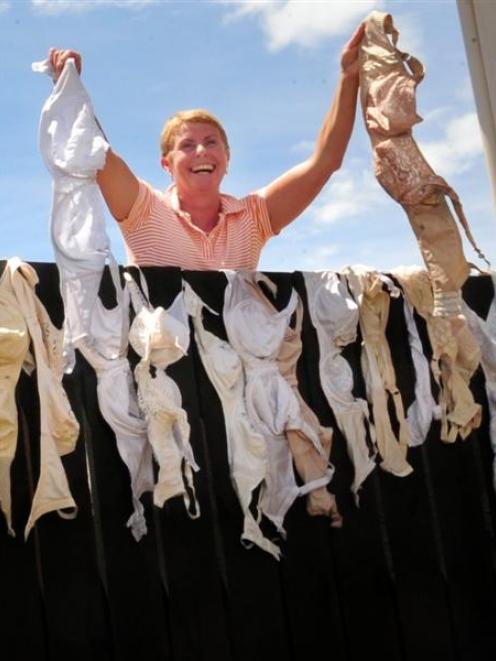 Sue Bailey admires some of the bras donated for Project Uplift. Photo by Craig Baxter.
Sue Bailey's cup runneth over.

From petite 10AA to more substantial 22DD cups, Mrs Bailey has been overwhelmed by the response from women in the Waimate district for Project Uplift - an initiative to provide bras for women in the Pacific Islands.

Following publicity about the project, Mrs Bailey would come home to find bras hanging off her back door handle.

Project Uplift was started by Rotary Club members in Western Springs, Auckland, after which it was taken up by other clubs.

Otago woman Shirley Farquhar, who is now chairwoman of Inner Wheel district NZ298, which covers the area from South Canterbury south, thought it would be a good project for Inner Wheel members to support.

Pacific Island women were often big-busted and they got abscesses and infections, along with irritations, under their breasts.

If they could "lift their boobs up", it would help prevent the problem, she said.

Small-sized bras would be used to encourage teenagers to wear them, and if any were surplus, the elastic could be used for repairs so there was no waste.

Mrs Bailey was the "drop-off lady" for the Inner Wheel Club of Waimate, which has 26 members.

Word had spread among the community and she now had "120-odd" bras of all shapes and sizes, from plain and padded to lacy and downright fancy, and some appeared to be brand-new.

She recently hung the bras along her fence in urban Waimate, which caused quite a stir among passers-by.

It had been a very worthwhile project, Mrs Bailey said, and she was delighted with the response from not only Inner Wheel members but also local women.