The swimming hole at the green bridge over the Taieri River at Waipiata has been given a clean bill of health by the Otago Regional Council this summer, recording only one spike of E. coli earlier in the season but since falling in the green band of readings that is considered very safe for swimming. Photo: Allied Press Files.
Water quality in Otago has been good so far this summer, Otago Regional Council (ORC) seasonal recreational water quality testing shows.

Three sites have had alert/amber warnings at certain times since the summer round of testing began at the beginning of December, but readings for those sites at other times and for all other sites have been considered safe for swimming. 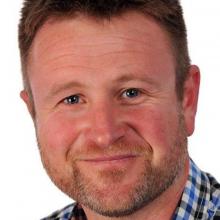 Scott MacLean.
The ORC does its summer water quality testing — for E. coli in freshwater and enterococci for marine water — weekly each year from the beginning of December until the end of March.

This summer the Kakanui River at Clifton Falls Bridge is the only site to have its most recent reading in the amber/alert range, recording 510 parts of E. coli per 100ml of water on December 28.

ORC duty director Scott MacLean said there was a large colony of nesting gulls at the site, in rugged terrain, about 5km above the Clifton Falls bridge.

"Unfortunately, these nesting gull colonies are likely to continue to cause high E. coli concentrations in the upper Kakanui River, particularly during the breeding season."

Readings at both sites had since fallen to the green band of fewer than 260 E. coli parts per 100ml of water, which was considered very safe for swimming, Mr MacLean said.

He said water quality in Otago’s rivers and at beaches was "generally pretty good over the summer", especially in the Central Otago and Queenstown Lakes districts.

"However, in poor weather, heavy rain flushes contaminants from urban and rural land into waterways and because of this we advise people not to swim for at least two days after heavy or prolonged rain — even if a site generally has good water quality."

Several other sites have had only green readings since the beginning of December, but still have a general caution.

All other sites have had green readings all summer and have no cautions. Those sites are: Lake Hawea at the Holiday  Park, Lake Wanaka township, Lake Hayes at Mill Creek, Lake Wakatipu at Frankton Bay, Hampden Beach at the campground, the Waikouaiti Estuary, Lake Waihola, Kaka Point and the Catlins at Pounawea.

Mr MacLean said the water sampling was generally done weekly, although testing scheduled for December 26 and January 2 was done late because of delays and closures on statutory holidays.

The ORC was satisfied its weekly testing was sufficient, he said.

"Usually sampling occurs on a Monday and the results come into the ORC on the following Thursday, after which they are automatically uploaded to the Lawa site."