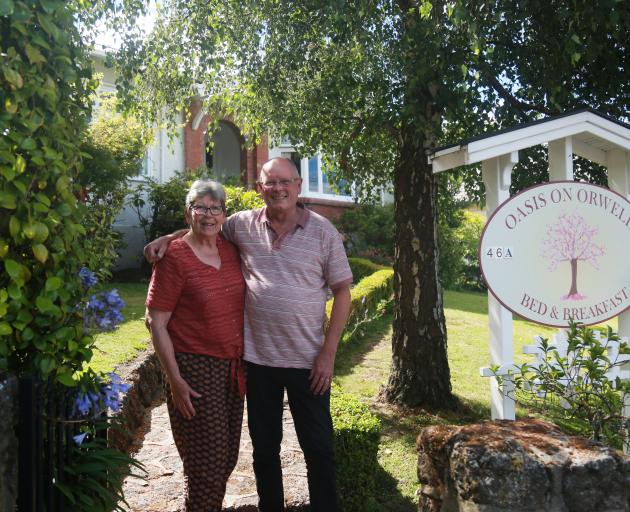 Liz and Dave Clare outside their Oamaru bed and breakfast Oasis on Orwell, which has won a Booking.com traveller review award. PHOTO: REBECCA RYAN
The accolades for Oamaru keep on coming.

Over the past 10 years, the town has been labelled one of the 25 "hippest" destinations in the world by Cuisine magazine, and New Zealand’s "coolest" town by Lonely Planet. .

Yesterday, it was named the most welcoming town in New Zealand by Booking.com, as part of its annual guest review awards.

Oamaru claimed top spot, followed by Hokitika, and Invercargill. Each town had to have at least 50 eligible accommodations to be included in the list.

Waitaki Mayor Gary Kircher said the recognition did not come as a surprise.

Oamaru had always prided itself on its welcoming reputation and it was special that had been recognised at a national level, Mr Kircher said.

"We’re used to knowing most of the people as you walk along the street and so it’s no big deal for us to say ‘hi’ to people as we’re walking along."

One of the Oamaru properties to receive a traveller review award from Booking.com was Oasis on Orwell, owned by Dave and Liz Clare.

Last year, Oasis on Orwell was named in the top 10 in New Zealand for Booking.com traveller reviews with a rating of 9.9 out of 10.

Mr and Mrs Clare started running the bed and breakfast 10 years ago, after moving to Oamaru from Auckland.

"We try and make people enjoy themselves and feel relaxed," she said.

"It’s the service and going the extra mile that makes the impression. You do that and people come back."

Before Covid-19, 95% of their guests were international.

Lockdown gave them a chance to explore more of the South Island, and domestic tourism was keeping them "busy enough".

Being named the most welcoming town in New Zealand was a testament to the hard work of accommodation providers in Oamaru, Tourism Waitaki general manager Margaret Munro said. 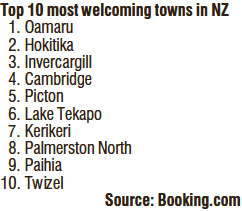