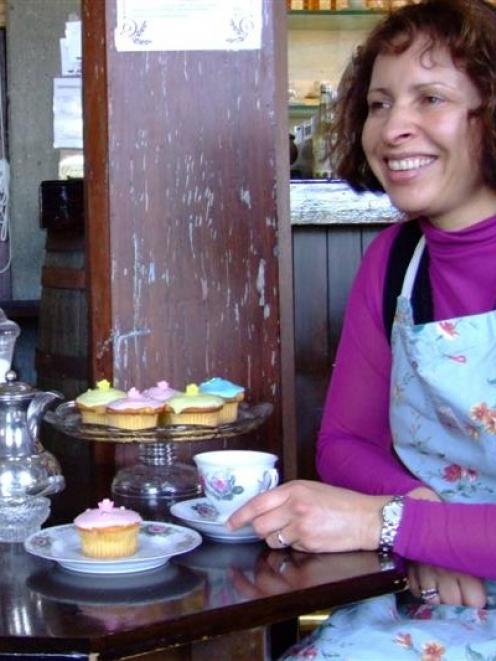 Debbie Preston enjoys high tea in the Whisky Tea Room. Photo by Sally Rae.
The New Zealand Malt Whisky Company is now actively looking for partners to build a whisky distillery - with Oamaru being touted as a possible option.

Last year, the company was granted resource consents to build a $5 million single malt distillery, restaurant and bar at Victoria Flats, near Gibbston. The barrels would be transported to Oamaru for ageing and bottling.

The company leased the three-storey Loan and Mercantile building in Harbour St from the Oamaru Whitestone Civic Trust three years ago, having bought the remaining stocks of single malt whisky produced at the Willowbank distillery in Dunedin.

This week, Debbie Preston said the granting of consents took the project "to the next level" and they were now seeking partners.

Mrs Preston and her husband, Warren, had also been offered buildings in Oamaru to establish a distillery and that was another option.

There had also been interest in the land at Victoria Flats - "so that's thrown a bit of a curve ball at us. All the balls are up in the air. We're going to see where they land in the next six to seven months," she said.

In the meantime, Mr and Mrs Preston have replaced their Whisky Cafe, which opened in the Loan and Mercantile building last November for the summer season, with the Whisky Tea Room, serving high teas, Devonshire teas and lunches.

As well as the tea room, the impressive building also houses a barrel room, complete with tastings, and general store.

It was the building that sold the couple on moving to Oamaru.

The Preston family business is Mills Reef winery in the Bay of Plenty and, while still involved with the business, the couple wanted a change and to do something different.

There was now "winery after winery" in New Zealand, but not whisky distilleries, Mrs Preston said.

In Oamaru, the emphasis was on "getting the formula right" for the market and, with the establishment of a tea room, rather than a high maintenance cafe, they believed they were probably closer to the mark.

Tea rooms were happening in Auckland and Sydney, and it was suited to the Victorian Harbour-Tyne precinct.

"The whole high tea thing is very that era," she said.

With her floral apron and sugar cubes and silver tongs at the ready, Mrs Preston was a self-confessed "tea room lady".

The atmosphere was genteel, with fine bone china, cake stands, cupcakes and scones with compote and cream, she said.