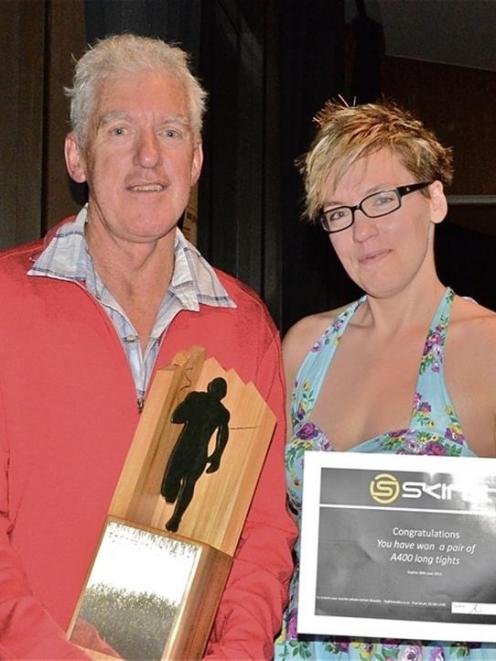 Veteran runner Mark Douglas, of Queenstown, with his Perseverance Trophy, and daughter Fleur Douglas, on Saturday night. Photo by Deborah-Lee Photography.
Fine weather and a battle supreme between two of New Zealand's top female distance runners made for a sensational 10th anniversary Routeburn Classic on the Routeburn Track on Saturday.

Victoria Beck, of Dunedin, won top honours in the Peak Performers women's division in a record time of 3hr 25min 14sec. She beat Whitney Dagg, also of Dunedin, the women's champion for the past two years, who was second in a time of 3hr 35min 51sec.

Third was Helen Gillespie, of Hokitika, in 3hr 37min 36sec.

Dagg was training for a super-endurance race, so she turned around at the finish line and ran back to The Divide and Te Anau.

Beck said she did not know what to expect from the run as it was her first in the event.

''I was worried it would be really technical, but it was better than I had imagined and I had it in the back of mind that it would be possible to win,'' she said.

Slippery track conditions due to heavy overnight rain resulted in slower times for the top male contenders than last year. However, Luke Hurring, of Timaru, still put in an impressive time of 3hr 03min 49sec in winning, with Dallas Wichman second in 3hr 03min 55sec and Thijs Hubber third in 3hr 10min 33sec.

Hurring said it was the first time he had competed in the Routeburn Classic, joining a friend from Auckland.

He mainly competed previously in 5000m and 10,000m track races, but said he had been ''mixing it up a little'' and recently took part in the Wanaka Challenge Half Iron Man.

''I had no expectations of the course as it was my first time, so the slightly damp conditions didn't faze me and I was happy with my race. It was good fun."

Queenstown runner Mark Douglas also set his own record, competing in all 10 Routeburn Classics. The Queenstown Primary School teacher was last across the line in 7hr 12min 26sec, having battled hip problems.

Running for the first time was his daughter, Fleur Douglas, who completed the course about an hour before her father. His achievement was noted with the surprise presentation of the ''Mark Douglas Perseverance Trophy'' at the awards ceremony on Saturday night.

Mr Douglas said he was ''never going to not do it'', despite the pain.

''It was pretty difficult because I was in pain going uphill from the McKenzie Hut onwards, but from there on there was no way I was going to give in. I just plodded on, very determined.

''I was completely blown away with the award, just overwhelmed, quite lovely. My daughter also did wonderfully well. I was very proud of her.''

Despite the medical issues Mr Douglas said he intended to return.

''My intention is to keep going. I'll be back if it's at all possible.''

Race organiser Evan McWhirter said he was thrilled to have got the race under way when all the weather forecasts and advice pointed to him having to call it off.

''Luckily the front we'd been worried about came through early and while it teemed down with rain all night long, when we woke up in the morning there was this fantastic `window' of good weather so we took it,'' he said.

Mr McWhirter said one of the most special moments was presenting the trophy to Mr Douglas, who was completely taken by surprise.

''We had the Perseverance Trophy specially made for him because he epitomises that. That was the highlight for me, giving him that trophy and touching the emotions of the big man.''

More than 320 runners took part in the tough adventure race which started at the Divide on Milford Rd, crossed the Fiordland National Park, over the 1127m Harris Saddle and finished in the Mt Aspiring National Park near Glenorchy.