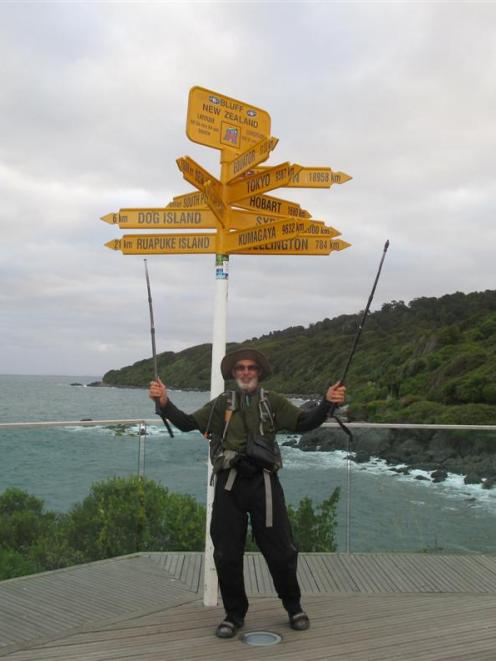 A week after finishing his 146-day odyssey on February 13, the Aucklander re-walked the Motatapu Track - it is part of Te Araroa - with his wife Linley.

This week, he is tackling the eight-day Dusky Track in Fiordland - widely considered New Zealand's hardest hike - with a nephew.

He completed the North Island leg over 80 days between March and May last year, then took an extended break until November before knocking off the South Island.

The retired forester and nursery owner is a life-long tramper who dreamed of walking the length of the country long before author and journalist Geoff Chapple founded the Te Araroa Trust in 1994.

Early inspiration came from one of his heroes, A. H. Reed, an author, publisher and inveterate long-distance walker who made the same journey - mostly on roads - in 1960 at the age of 85. 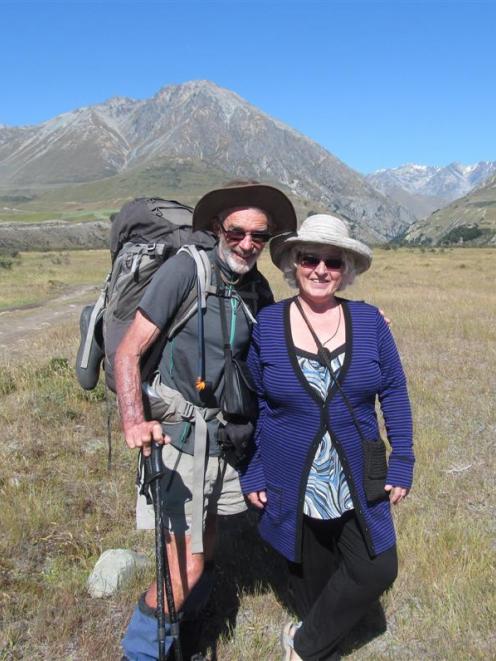 Murray Faulkner farewells wife Linley near Mesopotamia Station, in the Rangitata Valley, before setting off on another leg of the trail.
Mr Faulkner said Mr Chapple's ''brilliant'' achievement doubled his resolve, but the final trigger was his 70th birthday.

Mr Chapple told the Otago Daily Times that no records are kept of walkers' ages, but doing it at 71 is a ''terrific effort''.

Although he knew of a few older men who are walking the trail ''bit by bit'', he would not be surprised if Mr Faulkner is the oldest to have walked it almost continuously.

However, Mr Faulkner downplayed his age, and was indifferent to where he stands in the ''oldest Te Araroa walker'' stakes.

Age was no barrier to any pursuit, he reckoned.

''It's very easy to lose confidence in things and say, 'I can't do that'. But if you throw that out the window, you can do anything - it's just a frame of mind.''

He said Linley was his mainstay, driving their camper van and meeting him between each walking leg of between three and 10 days.

In between, she did her own exploring, visiting friends and doing short walks.

She was not surprised when he announced his Te Araroa plan.

''I thought, 'Oh yeah, it's another of Murray's crazy schemes'. It sounded like fun.''

Mr Faulkner said the experience had reinforced his appreciation for New Zealand's beauty, while his love for trees and plants gave him a constant source of enjoyment.

He encountered a ''huge number of characters'' during his travels, particularly farming folk, and benefited from their generosity.

A group of shepherds on a day off at Glenthorne Station on the shores of Lake Coleridge sticks in his memory.

They insisted he join their barbecue, and tried ''fattening me up with lamb chops''.

He accepted one beer, and then another, before becoming aware of the effect of alcohol after strenuous exercise and weeks of going without.

''I realised I had to get away or it would be a disaster. I went down the road and started to put up my tent, and I just couldn't work out how to put it up.''

''They love it, and they are publicising it by word of mouth - I can see it getting bigger and bigger."

The same cannot yet be said in his own country.

''It would be nice to see more New Zealanders doing it, but most people don't seem to know about it.''