Up, up and away for avalanche teams 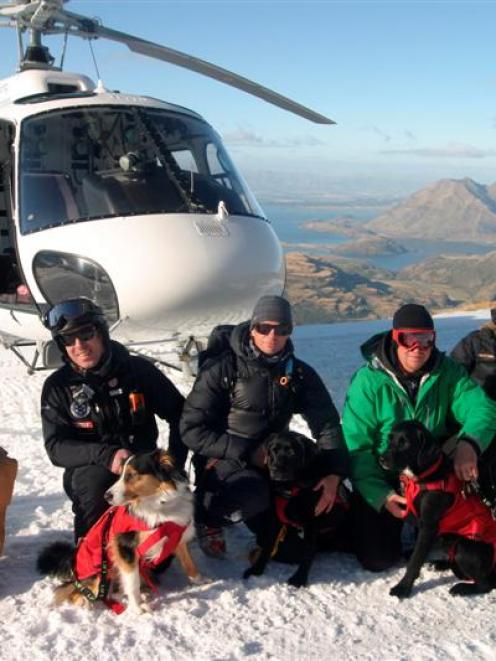 Handlers and dogs of the Wanaka Search and Rescue search-dog team at their first helicopter exercise for the winter at Treble Cone yesterday. They are (from left) Aspiring Helicopters pilot James Ford, team leader Matt Gunn and Rocket, Brendan Kearns and Millie, Andy Wardell and Tuki, Anna Easthope and Rua and Ra and Callum Grant and Zeffer. Photo by Matt Gunn.
The avalanche dogs of the Southern Lakes region and their handlers spent yesterday dangling on 20m strops, or long-lines, beneath helicopters as they undertook a refresher course at Treble Cone skifield.

Mr Gunn said the dogs reflected the confidence of their handlers: "We're in work mode.

"We take it seriously. And the dogs pick up on that."

Mr Gunn said the handlers found it "very, very exciting" to be lifted off the skifield car park several hundred metres into the air, while the dogs were less enthusiastic but well-behaved.

"They kind of give you the impression that they know there's no getting out of it and they might as well just relax the best they can and enjoy the ride."

He said the exercise was about refreshing the handlers in protocols around helicopters and use of the strop, and for the dogs, it was important to create a positive association with helicopters.

Mr Gunn said on one occasion, a helicopter carried on its strop - rated to carry 300kg - two members of the cliff rescue team, one dog handler and a dog.

Dogs best suited to avalanche work were those with good work ethics such as collie crosses, Labradors, pointers and springer spaniels.

During the ski season, avalanche dogs and handlers are on standby at all the major skifields in the region.

Mr Gunn said the dog team had one vacancy at present - for a handler with search and rescue experience willing to train a dog for bush searching.