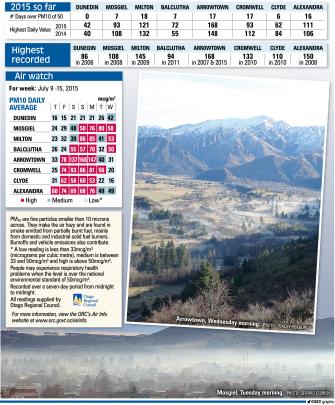 Arrowtown scored one of its worst air pollution readings on record in the past week and Otago towns have exceeded the national air pollution standard more than 88 times already this year.

The standard says towns should record more than 50mcg per cu m of PM10 particulates in the air only one day a year.

On Sunday, the level above Arrowtown reached 168mcg per cu m.

The reading was the town's equal highest.

The same level was reached once before, in 2007.

Alexandra and Arrowtown continue to record the highest levels of air pollution in the region.

In the past week they, and Mosgiel, Milton, Cromwell, Clyde and Balclutha repeatedly recorded readings significantly above the national limit. Dunedin was the exception, remaining in the low reading bracket.

PM10 levels were influenced by weather and climate of a particular location and Central Otago towns experienced ''extremely'' cold nights and calm conditions during winter.

Arrowtown, in particular, always had poor air quality in winter not only for those reasons, but because of its topography.

''Cold air will flow down the hill next to town through the evening and this will strengthen the inversion forming. This makes it especially difficult for smoke to disperse.''

Air quality in the township had improved since 2006, he said, but the council had moved the monitor to the ''worst'' area of town, as required by the standard.

''It's not that air quality has suddenly gotten worse, rather we are monitoring in a different spot.''

The high readings for the region were ''not especially unusual'' for winter conditions.

''Emissions will be at their highest as people are heating their homes and dispersion of that smoke will be at a minimum.''

Dunedin remained under the limit due its windy and coastal location helping to disperse smoke.

Other variables like amount of moisture in wood supply, how a burner was used, and whether there was sufficient air flow to keep the fire ''hot'' all influenced emissions.

The council recognised the need for warm homes and cleaner air to ensure the wellbeing of Central Otago communities and recognised ''tensions'' created by local environmental circumstances, he said.

Councils are required to reduce the number of days reaching over 50mcg per cu m to three a year by 2016 and one a year by 2020.

The regional council acknowledged earlier this year it was unlikely towns in Central Otago would be able to meet the 2020 deadline and a review of the council's approach to air quality was started.

It had continued working to improve the situation through continuing to fund upgrades to cleaner heating appliances and helping with insulation in Central Otago homes, Dr Palmer said.

''We are continuing this community support through our subsidies for upgrading home heating appliances.''