Catalina could return with its wings preened 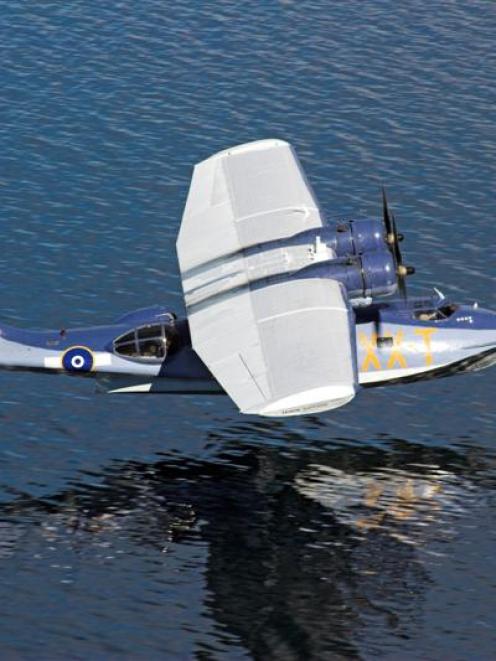 One of only two in the southern hemisphere still flying, the Catalina was recently moved into a hangar at New Plymouth, where the refurbishment work will be carried out by the Catalina Preservation Society.

Society president Lawrence Acket said the goal was always to have the aircraft back flying in time for Warbirds Over Wanaka 2014, on April 18, 19 and 20.

It last flew in Wanaka at the 2010 airshow. Its most recent airshow appearance was at the Battle of Britain Airshow at Ardmore in 2011.

''While the goal is to have the Catalina at Wanaka, it's still too early to confirm anything, simply because of the variables which could come into play between now and then,'' Mr Acket said.

Unlike a lot of other warbird aircraft, the Catalina had never undergone a full ground-up restoration.

''This means, essentially, everything we're dealing with is 70 years old.''

Mr Acket said there was something special about having the aircraft fly around Wanaka.

''For some reason, it feels like the Catalina is at home when it's in Wanaka. Maybe it's the lake and the mountains.''

The society was keen to hear from anyone with the expertise and time to help out with the wing-refurbishment project or with funding, either by joining the society or making a donation.

The New Zealand Catalina has a rich history operating around the world, including in Canada, Africa and northern Europe.

It is the same aircraft that starred in a 1990 documentary called The Last African Flying Boat, which tells the story of Frenchman Pierre Jaunet and his crew as they retrace the route flown by Britain's Imperial Airways in the 1930s from Cairo to the Indian Ocean.

At the time, Imperial Airways used Catalinas for luxury air travel around Africa.