Counterfeit $50 note use leads to warning 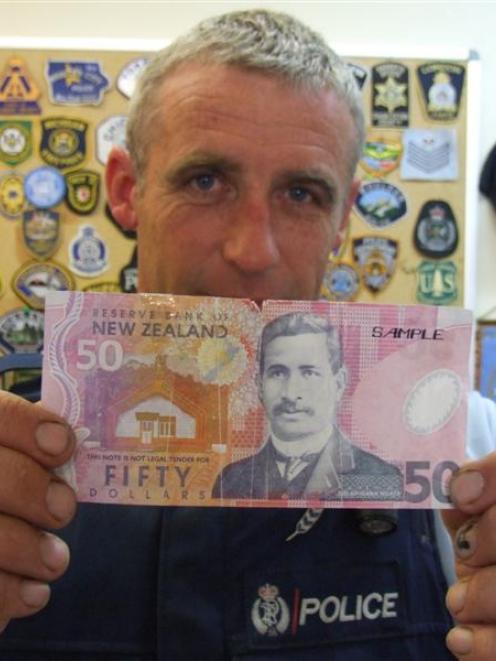 Constable Greg Nolet holds a counterfeit $50 note presented at a Wanaka shop this week. Photo by Matthew Haggart.
Police are reminding retailers everywhere to be mindful of counterfeit money being used before Christmas, after a fake note was used in the resort this week.

Constable Greg Nolet said the use of fake money was unusual, but the incident was a timely reminder for retail staff to be careful about counterfeit cash.

While the fake money was made of shiny paper and had been crinkled to make it look aged, there was no serial number on the note, but instead had a printed "sample" clearly visible on it.

"They will often be buying a small item to get lots of change.

"They'll wait for a very busy time at the counter to present the note and will often target young or inexperienced staff members," Const Nolet said.

If a retail worker noticed counterfeit money and confronted the customer, the person would often have a "pre-programmed" explanation, such as the use of the fake note being a genuine mistake, he said.

An officer from the Queenstown Lakes regional intelligence analyst unit told the Otago Daily Times he knew of no other recent incidents of counterfeit money being presented.