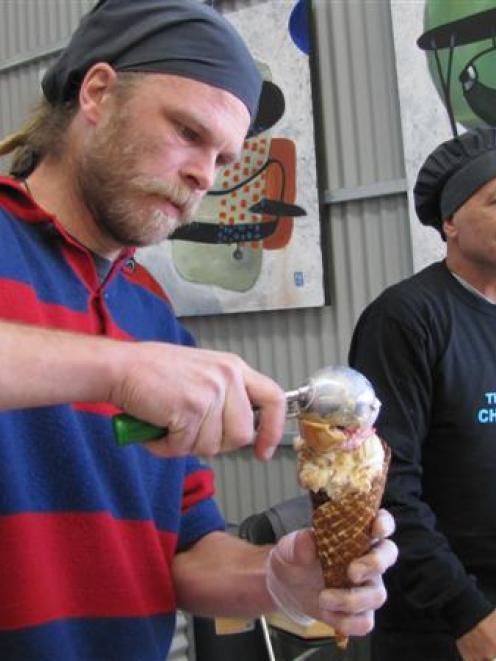 crowds_flock_to_wine_and_food_expo_3181497574.JPG
Wine and food vendors did a roaring trade at Warbirds Over Wanaka during Easter weekend and many say they will be back for the 2012 show.

They also hope the airshow expo has helped put the region on the map with domestic and overseas visitors and will keep visitors in the district beyond the three-day event.

The Warbirds regional wine and food expo was new at the long-running airshow this year and was designed to provide an alternative to the aerial attractions.

Event manager Mandy Deans said it was challenging to keep the airshow fresh and of interest to everybody.

"For many years we have produced a superb flying display and now we wish to cater for an ever discerning crowd that includes international visitors, women and families in general," Ms Deans said.

Exhibitors reported a constant stream of people through the doors to taste and sample the wares, followed by a later afternoon rush of thirsty pilots keen to finish their day on a high note or people looking for something to do while they waited for the crowded car parks to empty.

Richard and Tracey Bullock, of Pure New Zealand Icecream, said the response to their infant company's products had been incredible.

They have been making and selling icecream in Wanaka since December, using equipment imported from Italy, and raw ingredients of fruit, cream and sugar syrup and Belgian chocolate, with no additives.

"It has been really neat talking to people and hearing how they love it.

"The best part about being at a show is having that contact," Mrs Bullock said.

Steve Farquharson, of Wooing Tree vineyard, Cromwell, said he had "rattled through a fair few cases" of wine and it had definitely been worth coming to the show.

"People are promising to come and visit in the next few days," he said.

Jenny Hill, of Locharburn Wines, Cromwell, said her stall had done a roaring trade in rabbit stew and other hot food, with people interested in matching wines to their meals.

While she had not sold as much wine as anticipated, she had collected a good database of names, especially from Christchurch visitors.

"It is new, and they've [airshow commentators] done a good job with the publicity," Mrs Hill said.

Brewers from Arrow Brewery and Berriman's Cider, both in Arrowtown, shared a stall and did a roaring trade in the afternoons.

"It was a bit cold for drinking [on Sunday] morning but we had a very good day on the Friday practice day and [Saturday] we had a good run later on from mid-to-late afternoon," Darryl Jones, of Arrowtown, said.

Ian Mill, of Gibbston Valley Wines, said the expo was a good opportunity to showcase the region to visitors.

"It is a branding exercise for us but there's such a wide range of visitors here and a huge number of Australians.

"We've exceeded the target I set for the weekend.

"Saturday was excellent, as everyone expected, and Friday was better than anticipated.

"When we set up, one of the concerns was whether we would get enough traffic to the hangar but that has certainly happened," Mr Mill said.

Chefs from the New Orleans and Botswana Butchery stall said they were shattered after a weekend of preparing whitebait fritters, oyster delicacies and up to 300 burgers a day.

"We have no whitebait left.

"We went through 100kg in three days," Michael Mohr, of Wanaka, said.

Among other Otago produce available to the hungry hordes in the expo hangar were traditional hangi meals, cheeses, hazelnut and chocolate products, and fruit juices.

Outside the expo hangar, dozens more food stalls were dotted around the airfield offering everything from hot dogs and bacon butties to Dutch pancakes and Indian meals.