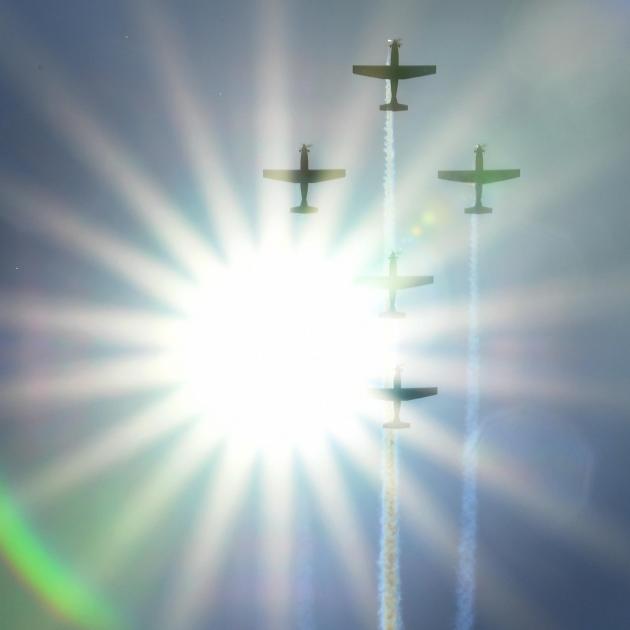 Warbirds Over Wanaka has been cancelled as travel restrictions due to the coronavirus cause major complications. Photo: ODT files
The southern hemisphere’s largest warbirds airshow, Warbirds Over Wanaka, has announced it is not going ahead, in the wake of the New Zealand Government’s response to the Covid-19 pandemic.

The Easter airshow had been expected to attract 55,000 people over its three planned days, several thousand of them international visitors.

Warbirds Over Wanaka general manager Ed Taylor said the decision to cancel was not taken lightly.

"We have a small but dedicated team, many of them volunteers, who have spent the past two years building up to this event and to have it ripped out from under us at the last minute is tough.

"But, at all times we have the safety of our participants and visitors at heart, and so have to accept we won’t have an airshow this year."

Mr Taylor said they took into account the travel restrictions announced by the Government this weekend and also impending restrictions on large public gatherings, and have made the call based on the safety of participants and airshow visitors alike.

Mr Taylor said organisers will now be working with their sponsors and suppliers to minimise the financial impact on the organisation, and then start working towards the next airshow at Easter 2022.

All tickets will be refunded in full, but organisers have asked ticket holders to wait for a few days while they confirm specifics about how people will be able to access refunds, Mr Taylor said.

- In Dunedin, a large conference that was to the held at the Dunedin Centre later this month has been postponed.

About 350 people were scheduled to attend the annual symposium of the South Island Whanau Ora commissioning agency, Te Putahitanga o Te Waipounamu in Dunedin from March 25-27 .

Organiser Helen Leahy said postponing the conference was an easy decision to make, as Whanau Ora always put the health of whanau first.

- Organisers of the Dunedin Fringe Festival said the programme would be adjusted in accordance with the latest advice from the Ministry of Health.

Festival director Gareth McMillan said some international acts had cancelled because of the requirement to self-isolate for two weeks.

Large performances, including the Opening Night Showcase and the Fringe in the Octagon would proceed if organisers were confident there was no additional risk to participants and attendees, Mr McMillan said.

Other events could also be cancelled at the discretion of the producers, he said.