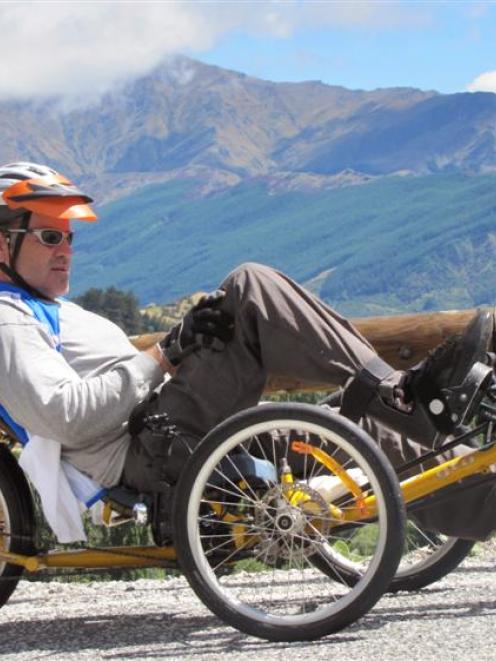 On January 23, 1997, Heikki Kaariainen crashed into an Arrow Junction paddock, near Arrowtown, after a solo paragliding training flight from the Crown Terrace went horribly wrong, and a forced landing broke his back, causing paralysis from the waist down.

"The accident was horrible, and it is difficult to describe the flashbacks. I remember feeling a horrible pain in my back and thinking something is definitely wrong," Mr Kaariainen (52) said while taking a rest yesterday.

On November 25, he set off on a cross-country endurance ride from Bluff to Cape Reinga using an ACC-funded 42-gear $7500 recumbent trike, with the ambitions of strengthening his legs and raising money for the Spinal Injury Trust.

"This model of trike usually costs $7500, but it cost me two legs and an arm ... Making my legs stronger and raising money for charity is my way of paying back," he said.

The day of the crash, he was flown to Christchurch Hospital, and then spent three and a-half months at the nearby Burwood Spinal Unit.

He said, after a month in hospital, doctors told him he should get used to his chair, as he would he would never walk again.

Three years on, he regained some muscle movement in his legs and swapped his wheelchair for walking sticks.

"I had six months of physio and exercise which is really to hard to describe ... those first steps were really the hardest," he said.

A former electronics technician, and self-confessed adrenaline lover, he lived in Queenstown for four years before the accident.

After pedalling about 25km each day, he hitchhikes back to collect his campervan, which he has lived in for most of the time since his accident, around Nelson and Tauranga.

Climbing the Crown Range yesterday, he said it was definitely the most difficult hill he had faced so far, but it was good to be back in Queenstown.

He was joined yesterday by volunteer Pol Petitpierre, of Spain, who controlled traffic and carried refreshments.

Last year, Mr Kaariainen wrote a NZ campervan guide book, under the pen-name Henry Van Campa, which he will be updating throughout his trip.

He was looking forward to a "formula one descent" down the other side of the Crown Range, into Wanaka today.

"I couldn't say how long the whole trip is going to take.

"It could takes months, if not a year.

"It's like a walkabout, it will take whatever it takes," he said.

Donations can be made at www.fundraiseonline.co.nz/HenryVanCampa/